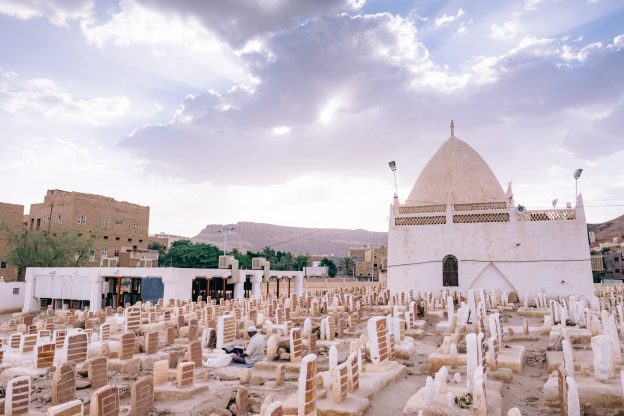 Imām Muḥammad bin `Umar Baḥraq said that it is probable that the name “`Aydarūs” is derived from the word “`aytarūs,” one of the names given to a lion in the Arabic language, and just as the lion is “the king of the jungle,” likewise Imam al-`Aydarūs rose above his peers to become the greatest of the awliyā’ of his time.

He was born in Tarīm in 811 (1408). When his grandfather Shaykh `Abd al-Raḥmān al-Saqqāf was given the good news of his birth, he said: “He is the Ṣūfī of his time.” He was blessed with the nurturing of his grandfather for the first eight years of his life, as well as his father, Shaykh Abū Bakr al-Sakrān, for the first ten. During these early years, he took the path of spiritual struggle and study, memorising the Qur’ān and delving into the inward and outward sciences. When his father died, his uncle, Shaykh `Umar al-Miḥḍār, took him under his wing and closely monitored his every step on the path to Allah. He married him to his daughter, Sayyidah `Ā’ishah. Sayyidah `Ā’ishah was known for her piety and closeness to Allah and was described as being “the daughter of a Quṭb (Shaykh `Umar al- Miḥḍār), the wife of a Quṭb (Imām al-`Aydarūs) and the mother of a Quṭb (Imam Abū Bakr al-`Adanī).”

Shaykh `Umar al-Miḥḍār passed away when Imam al-`Aydarūs was around 25 years old, and the `Alawī scholars of Tarīm unanimously recognised him, in spite of his protests, as their leader. From this role he expended great efforts in calling to Allah and rectifying society, often mediating with the tribal rulers of the time to prevent bloodshed. The rulers of the time were in awe of him. He generously received guests and helped the needy. It was said that he would spend his wealth like a king while at the same time being as humble as a beggar. He built several mosques, the most famous of which is Masjid al-`Aydarūs, in the heart of the city of Tarīm. In it, his place of khalwah can be found, where he would seclude himself underground to be with his Creator. 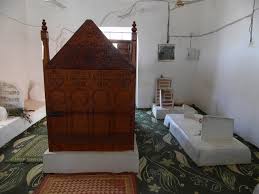 He and his brother, Shaykh `Alī, played a fundamental role in laying down the foundations of the `Alawī Ṭarīqah. They were amongst the first of the `Alawī scholars to author works clarifying the methodology of the Bā `Alawī Way. Their predecessors had not done so, as their primary concern was their students. Imām al-`Aydarūs’s most famous work is al-Kibrīt al-Aḥmar (The Red Sulphur), an explanation of the stations on the path to direct knowledge of Allah. He had the utmost admiration for the works of Imam al-Ghazālī, especially Iḥyā’ `Ulūm al-Dīn, on the greatness of which he wrote a treatise. He said of the Iḥyā’: “In it is the explanation of the Qur’an and the Sunnah. The one who reads it and acts upon it is guaranteed the love of Allah, His Messenger, the angels, the Prophets, Messengers and the Awliyā’. Were Allah to bring the dead to life, they would only counsel the living to act upon that which is in the Iḥyā’.” His daily wird was lā ilāha ill’Allāh, Allāh Allāh and Hū Hū (“He”) twelve thousand times each. This is the Dhikr al-`Aydarūs mentioned by his son, Imām al-`Adanī in his famous poem:

Rust from the hearts of the truthful ones

Imam al-`Aydarūs said: “Whoever desires divine purity must be in a state of brokenness in the depths of the night.” “Squeeze your body with spiritual struggle until you extract from it the oil of purity.” “The foundation of taqwā is avoiding shirk (associating partners with Allah); then avoiding acts of disobedience; then denying the lower self the things it desires; then denying oneself that which is in excess of one’s needs.” “The true meaning of freedom is for the soul to be free of love of the material world, status and fame such that one’s thoughts are not attached to anything other than Allah.”

The Imām died while returning to Tarīm from the town of al-Shiḥr on 12th Ramadan 865 (1460) and was carried back to Tarīm and buried in the Zanbal Cemetery. A dome was later erected over his grave. He left behind four sons – Abū Bakr (al-`Adanī), `Alawī, Shaykh and Ḥusayn – and four daughters – Ruqayyah, Khadījah, Umm Kulthūm and Bahiyyah. From his progeny came forth many great imams who carried the name of al-`Aydarūs. He thus became known as “al-`Aydarūs al-Akbar,” as he was the first and the greatest to be known as al-`Aydarūs and to distinguish him from those who came after him. May Allah give us the strongest of attachments to him, an attachment which benefits us in this life and the next.