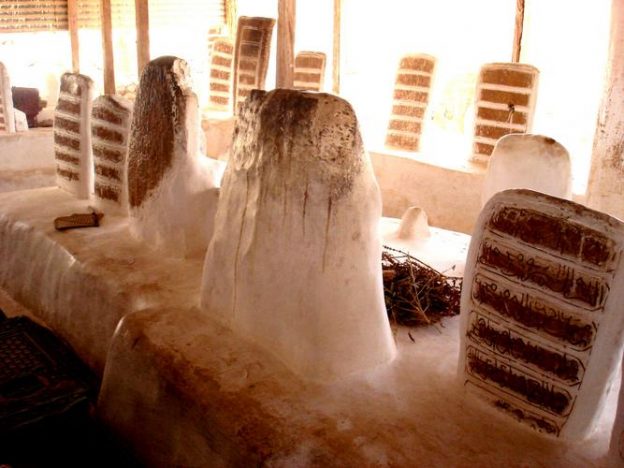 Al-Faqih al-Muqaddam was born in Tarim in 574 (1178) and grew up in an environment of knowledge and righteousness, memorising the Qur’an and mastering the sciences of the Sacred Law in his youth. He studied at the hands of Tarim’s greatest scholars and very quickly surpassed his peers until he reached the rank of mujtahid, and became known as “al-Faqih,” or “the Jurist.” One of the scholars once asked him about three hundred problematic issues in the various Islamic sciences in one sitting. He clarified every single issue and his answers were put together in a separate book.

At the same time he took the path of spiritual struggle until Allah gave him the greatest of openings. He would teach and fast during the day and spend his nights in worship in one of the caves in the Nu`ayr Valley outside Tarim. One night, his son Ahmad followed him. When the Imam remembered Allah, the whole valley responded by loudly proclaiming His transcendence, at which point Ahmad fell unconscious.

Although his predecessors embodied the way of ihsan mentioned by the Messenger of Allah ﷺ in the Hadith of Jibril, al-Faqih was the first of the `Alawi Sayyids to outwardly profess the way of Tasawwuf. This he did after the great Shaykh of the Maghrib, al-Ghawth Shu`ayb Abu Madyan, sent his envoy to Tarim with instructions to invest him with his khirqah or mantle, symbolising the transmission of spiritual authority. Shaykh Abu Madyan also instructed his envoy to go to Shaykh Sa`id bin`Isa al-`Amudi (died 671) in Qaydun in the Daw`an Valley to likewise invest him. Al-Faqih did not, however, fully embrace the way of Shaykh Abu Madyan. Rather he took a path which was a combination between the way of Abu Madyan, the way of Shaykh `Abd al-Qadir al-Jaylani and the way of his forefathers. He was assisted in this by Shaykh Sa`id al-`Amudi, who came to Tarim to offer him his allegiance.

The climate in which he lived was so unstable that al-Faqih would sit in the lesson of his teacher, Shaykh `Ali Ba Marwan, with his sword on his lap. Different tribes vied for power in the Hadramawt Valley and the `Alawi Sayyids, because of their popularity, were seen by tribal leaders as a threat. Al-Faqih had no desire for political power and hated to see bloodshed and dissension in the ranks of the believers. He thus symbolically broke his sword, announcing that his way and the way of the `Alawi sayyids and those that loved and followed them was one of non-violence.

The Messenger of Allah ﷺ had warned of the internal divisions that would blight his nation in a hadith narrated by Imam Muslim, and informed us that the one who sits at these times is better than the one who stands. He then praised the one who takes his sword and breaks its blade with a rock. The fact that al-Faqih al-Muqaddam had embraced the way of Tasawwuf and pacifism did not signify, however, a withdrawal from society and non-involvement in the affairs of the Muslims. To the contrary, his sword became the sword of knowledge and Prophetic character which he wielded to rectify and benefit society.

He and the `Alawi Sayyids after him would use the respect in which they were held to resolve disputes. They brought harmony to society by their concern for the rights of their fellow Muslims. This was manifested in attending their funeral prayers, visiting the sick and establishing gatherings of knowledge and remembrance. They spent their wealth on the poor and needy, on their guests, on building mosques and places of learning and establishing endowments for them, on planting date palms and organising irrigation and on providing drinking water for travellers on the roads and for city dwellers. Al-Faqih himself would set aside 360 barrels of dates at the time of harvest, and then he would distribute one barrel a day to the poor with the help of his wife, Sayyidah Zaynab, the daughter of his uncle Ahmad.

Just as he was concerned with the general populace, he established a zawiyah and exerted his efforts giving spiritual instruction to his pupils until they themselves became qualified to instruct others in the spiritual path. Amongst his greatest students were his sons `Alawī, `Abdullah, `Abd al-Rahman, Ahmad and `Ali, all imams in their own right, as well as Shaykh `Abdullah Ba `Abbad, his brother, Shaykh `Abd al-Rahman and Shaykh `Ali bin Muhammad al-Khatib.

Al-Faqih was the first to establish the annual group visit to the Prophet Hud (peace be upon him). On one occasion, he did not attend the visit, so the Prophet Hud came to him and said: “O Shaykh! If you do not visit me, I will visit you!”

Imam al-Haddad said in praise of him: “Shaykh of shaykhs, Master of the Giants”; “Shaykh of those on the path to Allah, one and all”; “a caller to Allah with true words and praiseworthy deeds”; “his state at the beginning of his path was like the state of his contemporaries at the end of their path.”

Towards the end of his life al-Faqih shunned creation and became completely absorbed with the witnessing of his Lord. When he was asked who would be the Shaykh after him, he replied: “Umm al-Fuqara’.” He was referring to his wife Zaynab, named like Zaynab bint Khuzaymah, the wife of the Messenger of Allah ﷺ, as “the Mother of the Poor” for her care of the destitute. She had been his best supporter in his life and continued his work after his death. His students came to her for guidance, assistance and blessings. Al-Faqih was finally united with his Lord in 653 (1255) and was buried in Zanbal. His grave was the first that anyone would visit in the graveyard, and for that reason he became known as “al-Muqaddam,” the one whose grave is given precedence over all others. He was universally recognised as the Shaykh of the `Alawi Tariqah and all chains of connection in the spiritual path return to him. Great Imams came forth from his progeny in every generation who continue to spread the light of prophecy until the present time. May Allah attach us to “the Greatest Master,” and benefit us by him in this life and the next.