Several of the `Alawī Imams were given good tidings of the coming of Shaykh Abū Bakr, among them Imām al-`Adanī. Shaykh `Abdullāh, the youngest son of Shaykh `Abd al-Raḥmān al-Saqqāf, was one day wondering how he could ever reach the station and prominence of his two brothers, `Umar al-Miḥḍār and Abū Bakr al-Sakrān. His father read his thoughts and said to him: “That prominence will be in your progeny.” Amongst this blessed progeny was Ḥabīb `Umar bin `Abd al-Raḥmān al-`Aṭṭās (the ancestor of all the great Imāms of the al-`Aṭṭās clan) and Shaykh Abū Bakr bin Sālim and all his blessed progeny. Shaykh Abū Bakr was born in Tarīm in 919 (1513). His father took him to the Imam of Tarīm at the time, Shaykh Shihāb al-Din, Aḥmad bin `Abd al-Raḥmān, complaining that his son was having difficulty in memorising the Qur’ān. The Shaykh said to his father: “Leave him and do not burden him. He will devote himself to it of his own accord and he will have a great affair.” It was as the Shaykh said: Shaykh Abū Bakr devoted himself to the Qur’ān and memorised it in around four months. Then he applied himself to learning the inner and outer sciences from, among others, Shaykh Aḥmad bin `Alawī Bā Jaḥdab, Shaykh `Umar bin `Abdullāh Bā Makhramah and Shaykh Ma`rūf Bā Jamāl, from whom he received his opening.

In his youth, he lived in the village of al-Lisk, East of Tarīm, and he would walk several miles by night to Tarīm to pray in its mosques and visit its graves. He would fill up the tanks used for ablutions in the mosques and fill up troughs for animals to drink before returning to pray the Fajr prayer in al-Lisk. He later moved to Tarīm but decided while still in his mid-twenties to move to the village of `Aynāt in the search of territory where he could spread the call to Allah and His Messenger ﷺ. He built a mosque and house there and began teaching and giving spiritual instruction. His fame spread and students started coming from different parts of Yemen and as far afield as India and North Africa. As a result, a new town grew up distinct from the old village of `Aynāt. He would send his students out to different regions to call people to Allah and educate them in the Sacred Law.

He had a great concern, like his predecessors, for the visit of the Prophet Hūd (peace be upon him). Leadership of the visit had passed from father to son since the time of al-Faqīh al-Muqaddam until it reached Shaykh Shihāb al-Dīn, who saw Shaykh Abū Bakr as being the most worthy of leadership. He duly passed it to him, and that leadership has remained in the descendants of Shaykh Abū Bakr until this day. It was Shaykh Abū Bakr who first established the great annual visit in Sha`bān, it being previously arranged according to the date harvest. In his old age he would be carried to the visit and when he was asked to compile a work on the merits of the visit, he said that the fact that he was still making the effort to visit in his old age was sufficient proof of its merit.

Shaykh Abū Bakr was immensely generous. He would supervise the affairs of his famous kitchen and distribute food with his own hands. He would bake a thousand loaves of bread for the poor every day – five hundred for lunch and five hundred for dinner. This was not including food prepared for his numerous guests. A poor dishevelled woman once came to give a small amount of food to the Shaykh. His servant turned her away saying: “Caravans are bringing goods to the Shaykh from far off places and he is not in need of what you have brought.” The Shaykh, however, was listening and he welcomed the woman, graciously accepted her offering and gave her a big reward in exchange. He then chastised his servant, saying: “The one who does not show gratitude for small things will not show gratitude for great things. The one who does not show gratitude to people does not show gratitude to Allah.” Out of his humility in front of his Lord in the last fifteen years of his life, he would sit constantly as one sits in the prayer (tawarruk) even when with his family.

He would fast the three hottest months of the year and for fifteen years consumed nothing but milk and coffee. He never left praying the eight rak`āt of the Ḍuḥā prayer and the eleven rak`āt of the Witr prayer, even while travelling.

He was the author of several works, amongst them Miftāḥ al-Sarā’ir, a book which every seeker of Allah is in need of on his path. Shaykh Abū Bakr authored it at the age of 17. He expounded on some of his vast knowledge of spiritual realities in Mir`rāj al-Arwāḥ and Fatḥ Bāb al-Mawāhib. He also composed a number of litanies and prayers upon the Prophet ﷺ, the most famous of which is Salāt al-Tāj (the Prayer of the Crown) which is widely read in the Indian Subcontinent. One of his supplications was:

“O Allah, I ask You for knowledge direct from Your presence and a pure spring to drink from, O Bestower, O Free of all want!” 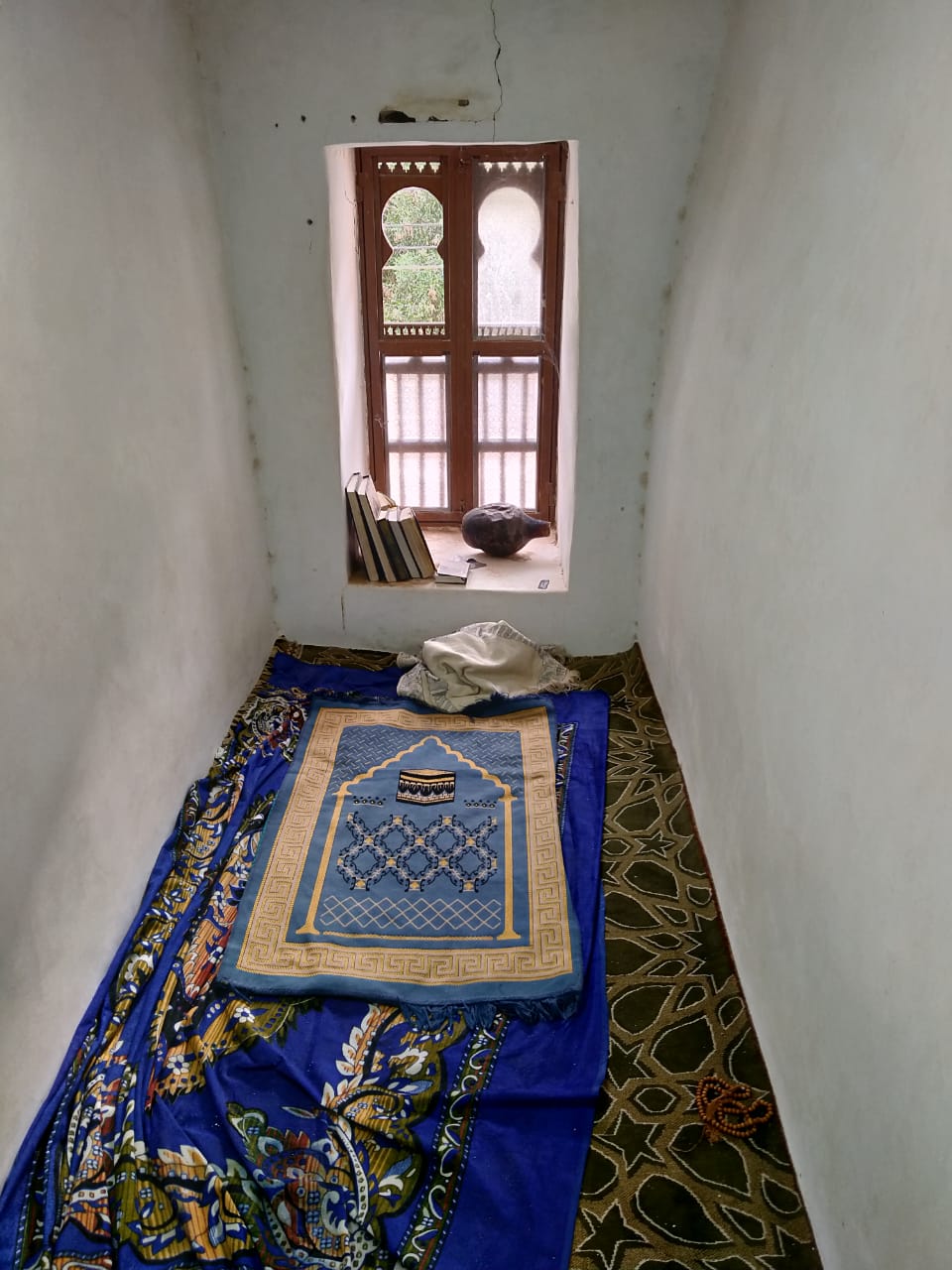 He had thirteen sons and four daughters. `Alī died before him and was the first to be buried in the cemetery which Shaykh Abū Bakr established in ‘Aynāt. Imām Ḥusayn was Shaykh Abū Bakr’s spiritual heir. Other sons included al-Ḥāmid and `Umar al-Miḥḍār. Through them, Shaykh Abu Bakr’s progeny spread far and wide and great imāms emerged in each generation.

A year before his death, Shaykh Abū Bakr led the visit to the Prophet Hūd (peace be upon him) and thousands crowded around him, almost fighting to kiss and touch him. When he saw this, he wept profusely and repeated Allah’s words: He is but a slave upon whom We have bestowed Our blessings.1

Shaykh Abū Bakr finally breathed his last in Dhū’l-Ḥijjah 992 (1583). He was buried in his cemetery in `Aynāt and a dome was erected over him. He said during his life that he would place secrets in the sand dune in which he is buried, and its blessed sand has been used time and again for healing purposes. Visitors on the way to the Prophet Hūd traditionally stop to pay their respects to Shaykh Abū Bakr, who contributed so much to the visit. He said:

Do you not know that we are people of honour, and that the one who loves us will always be under our banner?

We are generous people so whoever comes to us seeking will attain felicity when he meets us.