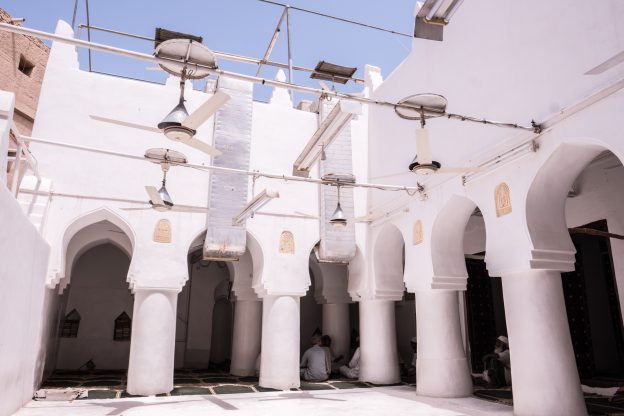 He was given the name “al-Saqqaf” because he concealed his true state from the people of his time under a ceiling (saqf) of humility and hatred of fame. Another opinion is that he rose above his contemporaries until he became like a ceiling on top of them. Imam al-Saqqaf was also known as “al-Muqaddam al-Thani,” the “second Muqaddam,” in recognition of the proximity in rank to his great, great grandfather al-Faqih al-Muqaddam.

Shaykh `Abd al-Rahman al-Saqqaf was born in Tarim in 739 (1338). He memorised the Qur’an and learnt the sciences of the Sacred Law in his early years. His thirst for knowledge of the Sacred Law led him to memorise most of Imam al-Ghazali’s Wajiz and Imam al-Shirazi’s al-Muhadhab. He was also endowed with knowledge of the heart which he received from the Imams of his time, amongst them his father, Shaykh Muhammad Mawla al-Dawilah, along with Shaykh Muhammad “Sahib al-`Ama’im” and Shaykh Muhammad Bā `Abbad.

His acts of mujahadah (spiritual striving) were immense. He reached the level where he would recite the whole Qur’an four times during the day and four times during the night. He spent 33 years without sleeping about which he said: “How can someone sleep when if he lies on his right side sees Paradise and if he lies on his left side sees the Fire?” He would spend a month or more in isolation in the proximity of the grave of the Prophet Hud (peace be upon him), taking with him his books and a small amount of provision. So constant was he in his remembrance of Allah that when he removed his clothes they continued to remember Allah. He was constantly seeking forgiveness from Allah, and as he rose from station to station he sought forgiveness for his shortcomings in the station that he had been in previously. He said: “We exerted all our efforts, but we were not given the greatest opening until we returned to the knowledge of the nafs (the soul).”

After travelling to Ghayl Bā Wazir, al-Shihr and Aden to deepen his inner and outer knowledge, he returned to Tarim, where he started teaching and giving spiritual instruction. He was greatly concerned with the spiritual progress of his students, who flocked from far and wide to learn from him. In doing so, he strengthened and built upon the foundations of the Tariqah, which had been laid by al-Faqih al-Muqaddam. His students would say that when they took him as their shaykh, he quickly removed from their hearts any love of the material world. He had the ability to transform their blameworthy traits into praiseworthy ones, just as the colour of cloth is changed with dye. He is recorded as saying: “I am the shaykh of anyone who has no shaykh until the Day of Judgement.”

He was, like his predecessors, concerned with benefiting society. He planted numerous date palms and upon each planting he would recite Surat Ya Sin or the whole Qur’an. Out of his scrupulousness upon handling the dates that would be distributed as zakat, he would not lick his fingers so as not to take anything from the property of the poor. He built ten mosques in different parts of Hadramawt. He said: “My heart has no inclination to other than Allah. I never built a house or mosque without first having been ordered to do so.”

The most famous of his mosques was Masjid al-Saqqaf in Tarim (pictured above). He said of this Mosque that “When I started building it, the four Imams (Abu Hanifah, Malik, al-Shafi`i and Ahmad) were in the four corners and the Prophet ﷺ was in the mihrab (prayer niche).” He established a Hadrah of dhikr in the Mosque on Wednesday and Sunday night, in which the poems of the great Shaykhs of the Way are recited. The Hadrah continues to this day. His pious daughter, Sayyidah Maryam, said that whoever has a need should go to the Mosque of her father on the night of the Hadrah and stand between the pillar that her father would sit against and the pillar where the people reciting sit and ask, and their need will be fulfilled by Allah’s permission.

He left behind thirteen sons and seven daughters. All his sons were great Imams, the most famous being Shaykh Abu Bakr al-Sakran and Shaykh `Umar al-Mihdar. One of his greatest students was Shaykhah Sultanah al-Zubaydiyyah, who reached the pinnacle of knowledge of Allah and established a ribat or hostel in her home town to accommodate seekers of this knowledge. She died in 847 and was buried in her home town, close to the grave of Imam al-Muhajir, which was known thereafter as the Hawtah (or “safe haven”) of Shaykhah Sultanah. Her poetry continues to be recited in the Hadrah.

In his old age, the Shaykh was unable to maintain the acts of worship in which he had been constant throughout his life. He thus had someone read the Qur’an to him while he listened. In spite of his weakness, he would always be in the mosque in a state of purity when the time of the prayer entered. He continued presiding over gatherings of knowledge and remembrance, gradually passing the responsibility on to his sons until he was finally united with his Lord in Sha`ban 819 (1416). He was buried in Zanbal alongside his father.