Allah says: Do they not reflect? Their companion is no madman. He is but a clear warner.[1]

Allah invites us to reflect on the greatest of His signs: Muhammad ﷺ.

Imam al-Busayri says in the Burdah:

He is the greatest sign for those who seek to reflect

And the greatest blessing for those who seek to gain

Reflecting upon Muhammad will lead to knowledge of Allah.

Anyone who looks at his life cannot say that he is mad. Is his immense character, his humility, his truthfulness or his trustworthiness evidence of madness?

Have the statements of any person been recorded more than his? To this day whenever a discovery is made we find that the concept has already been mentioned either in Allah’s revelation or in the statements of Muhammad.

He establishes a principle and centuries pass and that same principle continues to spread while other ideologies come and go. We still find in his words the solution to our problems. Do we find this in anyone else’s words?

Who can be compared to him?

What intentions should we make when we play sports?

You should intend gaining strength to worship Allah and obey His commands and to use it to gently call people to Allah. You should remember Allah while taking part.

Which comes first: certainty (yaqin) or knowledge of Allah (ma`rifah)? 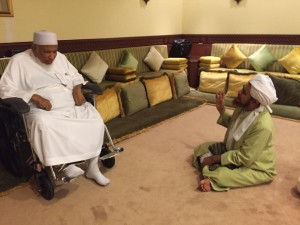 Sayyidi Habib Umar bin Hafiz (may Allah protect him and benefit us by him) explains the criteria for showing people respect and veneration. Summarised from a Rawhah lesson in Dar al-Mustafa, 18th Shawwal 1437

This is how the Companions expressed their veneration for the Prophet ﷺ and for one another. When the delegation of the tribe of Abd al-Qays came to visit the Prophet ﷺ in Madinah they rushed to greet him and kiss his hand (Ahmad). The Prophet did not rebuke them for doing so. He did not say they were being excessive or that they were committing shirk.

On the other hand it is blameworthy to show respect and veneration to an oppressive ruler or to someone who is openly disobedient to Allah.

As for the person who is being shown respect, they should dislike this and see themselves as being unworthy of it. Many of the pious would tell people to sit down if they stood up for them.

The Prophet ﷺ said: “If someone loves for men to stand up for him out of veneration, let him take his place in the Fire (Abu Daud).”

Sayyidi Habib Umar bin Hafiz (may Allah protect him and benefit us by him) emphasises the importance of reflection (tafakkur). Extracts from a lesson in the Book of Reflection from Imam al-Ghazali’s Ihya Ulum al-Din. Dar al-Mustafa, 16th Shawwal 1437

If someone’s reflection is sound and their heart is pure, their reflection increases them in faith, tranquillity, certainty and knowledge of Allah. It leads them to perfect their transaction with Him. They will then receive spiritual assistance (madad) from everything that they gaze at.

Everything you see around is a source of mercy for you if you turn to Allah but it is a curse if you turn away from Him. If all you reflect upon is how to gratify your desires, then you are in reality in constant prostration to the idol of your lower self without realising. The majority of people are in prostration to their lower selves and their caprice. That is why Allah says: Were you to obey most of those on the earth they would lead you away from the path of Allah (6:116).

Everything around us is a manifestation of Allah’s action and it is through His actions that we come to know Him.

“The closest thing to you is your own self. In you are wonders which point to the greatness of Allah. It would take lifetimes just to reflect upon one small aspect of your makeup but in spite of this you are heedless and ignorant of your own self.

If someone were to sculpt an extremely life-like image of a human being, people would marvel at the sculptor’s skill and deftness, in spite of the fact that he did not create any of his materials or tools or his own will and knowledge. Allah, however, brought each human into existence from a drop of semen and then created its body, its senses and its organs with the utmost precision and perfection. In spite of this, people look at their own bodies and are heedless of the One who created them and fashioned them and are not startled by His majesty and wisdom.

Look at how His mercy accompanies His power. When the embryo becomes too big for the womb, He guides it to turn upside down and come out of that narrow opening as if it knows exactly what it is doing. Then He guides it to suck the mother’s breast so that it receives the exact amount of nourishment that it needs. When the milk is no longer sufficient, He causes the teeth to appear so that the baby can begin to eat solid food. Throughout this period Allah places mercy in the hearts of the parents so that they care for the baby who is completely unable to take care of itself.”

How do I maintain a good opinion of others?

You do this by ignoring their faults and focusing on their praiseworthy qualities and by remembering that Allah may forgive anyone and give them a good ending. Be certain that the smallest of your sins is far graver than the sins of all other people. Remember that your Creator has commanded you to have a good opinion of others and to have a heart full of love and respect for them.

How do we combine between forbidding evil, maintaning a good opinion of others and leaving that which does not concern us?

When we forbid someone from doing something wrong we do not believe that they will have a bad ending or that they will be punished. Rather we believe that Allah will forgive them and replace their bad deeds with good deeds and perhaps they will intercede for us on the Day of Judgement. At the same time we do not spy on them or pry into their private affairs. If we do this we have left that which does not concern us. If we do see someone committing an act of disobedience then it concerns us to stop them from them doing it as far as we are able. The Prophet ﷺ said that if someone falls into an act of disobedience they should seek Allah’s concealment but only if they expose themselves we carry out the hadd punishment. 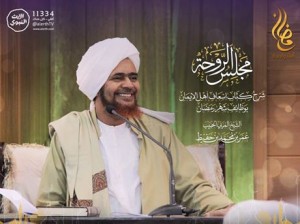 Sayyidi Habib Umar bin Hafiz (may Allah protect him and benefit us by him) discusses the manifestations of the Prophet’s generosity, commenting on the hadith of Ibn Abbas. Extracts from Rawhah lessons in Ramadan 1437 / June 2016.

The Messenger of Allah ﷺ is the closest of people to Allah the Most Generous and is thus the most generous of Allah’s creation. In fact a manifestation of his generosity is that he is the cause of everything coming into existence.

In his lifetime he was the most generous of people. He never said no to anyone that asked him for anything. He once gave a man a valley full of sheep. The man returned to his people saying: “Accept Islam, for Muhammad gives like someone who does not fear poverty!”[2] He fulfilled people’s needs whether they were material or spiritual. He fed the hungry, taught the ignorant and guided those who were astray.

The Prophet ﷺ said: “The miserly person is the one who does not bestow prayers upon me when I am mentioned in his presence.”[4] Such a person is miserly because he has failed to recognise the Prophet’s immense generosity.

His generosity will be manifested in the most complete way on the Day of Judgement when even the Prophets will be silent. Only he will intercede on behalf of the whole of creation. If this was the only manifestation of his generosity it would be sufficient for no one else has a portion of it.

If someone strives to be generous they will be connected to the most generous of people ﷺ . Such a person shows generosity to himself first by removing blameworthy traits and attaining praiseworthy traits. He then shows generosity to those closest to him by fulfilling their needs and guiding them. He does what he can to assist those in need and prays for them in abundance. But in doing so he does not believe himself to be showing generosity independently of Allah. Rather he sees himself as being in absolute need of Allah. This is why the Prophet ﷺ  said: “I am merely someone who distributes and Allah is the One Who Gives.”[5]

[5] Narrated by al-Bukhari and Muslim

[6] Narrated by al-Bayhaqi and Abu Ya`la

I understand the meaning of love of Allah in my mind but it has not yet entered my heart. What can I do?

Does someone have to be in a blessed place to receive spiritual assistance?

If someone has the choice and the ability then they should visit blessed places to seek spiritual assistance. However, we should be certain that Allah’s gaze is upon the whole earth and no place is beyond His knowledge. Wherever someone is (even if he is not on the earth) he will receive spiritual assistance through his shuyukh and chain of connection to the Messenger of Allah ﷺ according to his truthfulness (sidq).