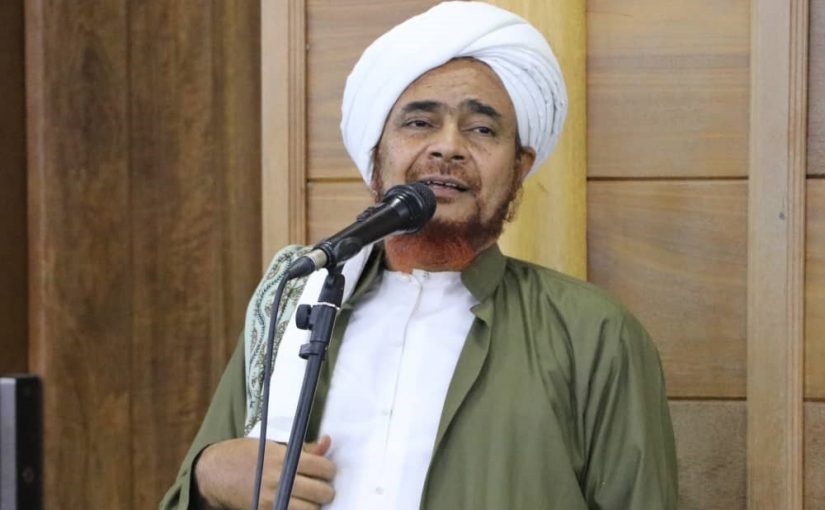 Sayyidi Habib Umar bin Hafiz (may Allah protect him and benefit us by him) calls us to unite under the Banner of the Beloved ﷺ .

His wife said: “O what a calamity!”

He said: “O what a delight – tomorrow I will meet my loved ones – Muhammad and his Companions!”

Everyone at death will either say: “O what a calamity!” or: “O what a delight!”

If the name of Muhammad has not been inscribed on someone’s heart then there will be no delight for him, because he found delight in things which Allah does not love: money, status, power and other things. He found no delight in that which Allah ordered him to find delight in: Say: “In the bounty of Allah and in His mercy – in that let them rejoice! That is better than the wealth they amass.”1 I praise Allah Who has gathered you together under the banner of His love. This love brought us together and removed the barriers between us, and this is what it does if it is firm in people’s hearts. The Devil put barriers between Muslims, between the people of la ilaha ill’Allah by means of people’s caprice and lower selves and by means of people’s engrossment in fulfilling their desires and by means of people’s base ephemeral cravings. If a person’s heart has been made pure by the love of his Lord and His Messenger then there are no barriers between him and the believers which prevent him from loving them and taking them as friends for the sake of Allah.

On those who believe and do good works the Most Compassionate will bestow love.2

The believers are nothing less than brothers to one another.3

Your real friends are only Allah, His Messenger and the believers – those who establish the prayer and pay zakat and bow down humbly in worship.4

Those who turn for friendship to Allah and His Messenger and the believers – it is the party of Allāh that must certainly triumph.5

There are many people calling on the earth, many organisations, many opinions. They call us to dispute amongst ourselves, to hate each other. They are all cut off from Allah and connected to the enemy of Allah. This, however, is the call of Allah and His Messenger: “Allah revealed to me: be humble, such that no person oppresses another, no person shows arrogance to another. Be brothers, O slaves of Allah.” “The believers are to one another like one building or like the fingers of one hand – they support each other.” “The believers in the love, mercy and compassion they show one another are like the body. If one part of it suffers from an ailment the rest of the body complains of insomnia and fever.”

We believe in this, O Lord, so allow us to attain true faith. We ask that through Your call and the call of Your Messenger the darkness of all those that call to division is removed.