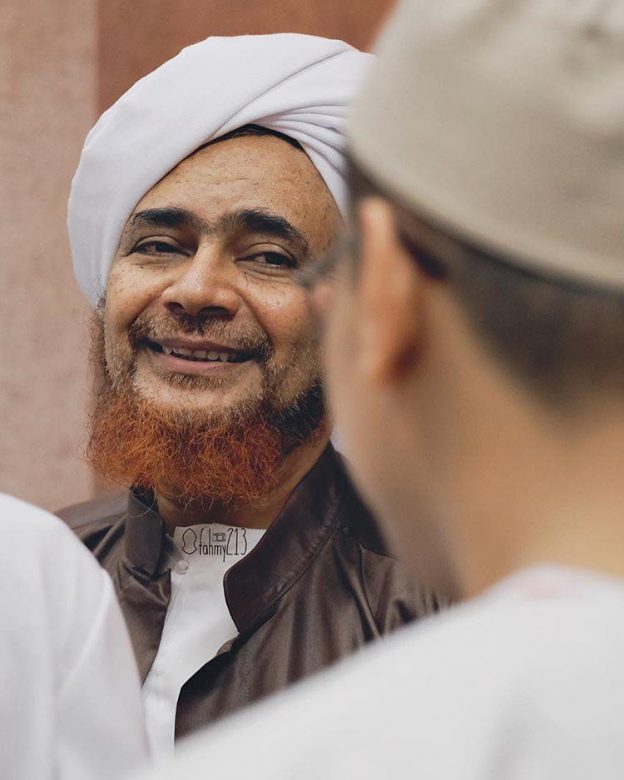 Sayyidi Habib Umar bin Hafiz (may Allah protect him and benefit us by him) encourages us to emulate the Beloved ﷺ  in our homes.

When your children enter the house teach them to enter on their right foot and say:

(In the name of Allah. O Allah, I ask You the best entrance and the best exit).

Beautify your house with the banner of following the Best of Creation. Anything that takes place in the house should be based on the teachings of the Qur’ān or the Noble Sunnah or Prophetic Character. We should interact with our children and with our womenfolk on the basis of the Prophetic model. He said:

Act upon every sunnah in the household: sweep the house, help with the cooking, serve your family. Your example ﷺ used to serve his family, he used to milk goats, carve the meat, patch up his clothes, mend his sandals and sweep the house. If something needed to be cleaned he did not say: “Why have you not cleaned this?” Rather, he went and took the broom and swept up the dirt with this noble hand, may Allah bless him and grant him peace.

They said to Sayyidah Aishah, the Mother of the Believers: “He has such an awe-inspiring presence. If someone meets him in the street it is as if there is an army approaching. How were you able to speak to him normally in the house? Was it not difficult being in his presence?”

She replied: “No, by Allah. He would mix with us, he would laugh and joke with us. We would sit with each other and speak to each other. His character was so beautiful that we would not notice him. The exception was a lamb that used to live in the house. It used to come and go, but if the Messenger of Allah entered, it would sit in the corner and remain motionless. He would be with us until the time for prayer came and then he would go out to the prayer as if he did not know us and we did not know him.”

If people’s human faults became exposed, he would conceal them with his forbearance and his generosity. He once had guests when he was in Sayyidah Aishah’s house. Sayyidah Umm Salamah sent a plate of food to the Prophet. Aishah was furious that Umm Salamah had sent food to the Prophet on her day with him. “How dare she send food to try to impress the Prophet? I am the one who will honour the Prophet and his guests!” Her nature got the better of her and she threw the plate on the ground, causing it to break. The Prophet saw what had happened. He got up, brought another plate and picked up the food and put it on the plate and then served it to his guests, saying: “Your mother has become jealous.” His face did not change and he did not make a commotion. When they had finished eating he told Aishah to keep the broken plate and give another plate to Umm Salamah, even though both plates belonged to him. He told `A’ishah to take the broken plate as a reward for her behaviour. This was how just and fair he was in his dealings, may Allah bless him and grant him peace. This was how he lived.

Allah says to you: “If you want to gain My love, I have shown you how to do so by following My Beloved.”

So whether you are speaking or eating or sleeping or using the toilet or getting dressed or speaking to your family, just follow his example. Look how easy Allah made it for us! Had Allah wished, He could have brought forth the reality of Muhammad in another form – not in the form of a human or a jinn or an angel – but He decided to bring him forth in human form. Allah brought him forth in human form and placed in him unique attributes, so he came into this world as a human, but unlike any other human, a light that dazzled people’s intellects. He then passed through the different stages – from infancy to childhood to youth. He bought and sold and herded sheep. He set the example so that his Ummah could follow in his footsteps.

Allah says to us: “Be aware of Me and follow My Beloved. Do not allow the things which I have created to cause you to forget Me. If you do this I will love you: So follow me and Allah will love you.”

May Allah attach you to His Beloved and make you firm on his way. Make us among those who perfect our following of him inwardly and outwardly. Make us people that embody his noble character. Beautify us with taqwa, with love and with following Your Beloved.