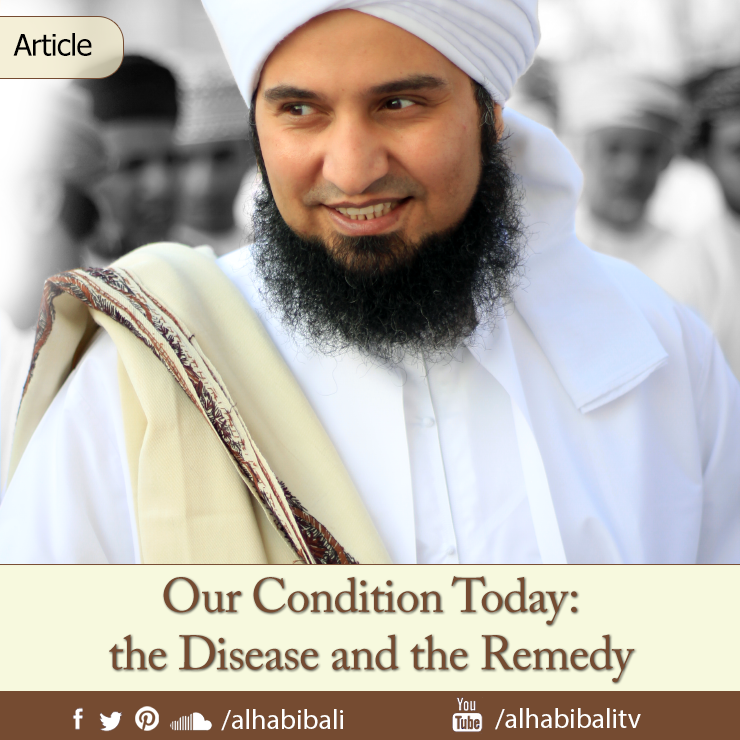 Sayyidi Habib Ali al-Jifri (may Allah protect him and benefit us by him) assesses the condition of the Ummah.

We live in a time of struggle. Things happen fast and one event quickly follows another. This leads to an imbalance, impairs people’s judgement and clouds their vision. People are in dire need of some quiet time in which to stop and reflect. They may then attain a moment of truthfulness and Allah will in turn bless him with some insight.

Away from the noise and the disputes, someone who reflects will find that the calamities of the Arab world can be attributed to three diseases:

The roots of this disease lie in what our the Prophet Muhammad ﷺ called: “The disease of nations.” He said: “The disease of previous nations has crept up upon you: envy and hatred. Truly, hatred is a razor: it shaves away not a person’s hair, but their religion.”

The remedy lies in spreading peace and love, as mentioned at the end of the same hadith: “I swear by the One in Whose hand my soul lies, you will not enter Paradise until you believe, and you will not believe until you love one another. Shall I not inform you of something which enables you to attain this? Spread peace among yourselves.” (Narrated by Ahmad, Tirmidhi and Abu Ya’la)

Abu Dharr (may Allah be pleased with him) said: “I once traded insults with a man. I insulted him by mentioning his mother, who was not an Arab. He complained about this to the Messenger of Allah. He said ﷺ: ‘O Abu Dharr, you are someone who still possesses some of the qualities of the Age of Ignorance!’” (Bukhari, Muslim)

Imam Ibn Hajr and Imam al-Nawawi mention that the man who Abu Dharr insulted was the Companion Bilal bin Rabah. His mother’s name was Hamamah and she was Nubian.

The remedy is in making God-consciousness (taqwa) the criterion in judging a person’s merit. The Prophet ﷺ said: “An Arab only has merit over a non-Arab through taqwa.” (Grading: sahih. Found in Ahmad and others)

The roots of this lie in what our Master ﷺ called feebleness (wahn). He said: “Allah will surely cast feebleness into your hearts.” Someone asked: “What is feebleness?” “Love of worldly things and hatred of death,” he replied. (Grading: sahib. Found in Abu Dawud)

The Prophet ﷺ also said: “This material world is sweet and lush and Allah is placing you in it to see how you act. So beware of the material world.” (Muslim)

The Prophet ﷺ also said: “I swear by Allah that I do not fear poverty for you. I fear rather that the material world will be opened up to you as it was opened up to those before you and that you compete over it as they competed over it and it destroys you as it destroyed them.” (Bukhari, Muslim)

The Prophet Muhammad ﷺ warned us about what these sicknesses will lead to:

The Prophet ﷺ said: “I swear by the One in Whose hand my soul lies, the world will not end before people experience a time in which the killer will not know why he killed and the person killed will not know why he was killed.” Someone asked: “How will that be?” He said: “There will be killing: both the killer and the person killed will end up in the Fire.” (Muslim)

The Prophet ﷺ said: “Just before the last hour there will be killing. You will not be killing polytheists but rather you will be killing each other, to the point where a man will kill his neighbour, his brother, his uncle or his cousin.” The companions asked: “Will we still possess our intellects at that time?” He said: “The intellects of the people of that time will be removed. All that will remain will be the dregs of society. Most of them will believe that they are fighting for a cause but in reality have no cause [to fight for].” (Grading: sahih, in Ahmad, Ibn Hibban, Ibn Abi-Shayba)

3. Conspiring of Others against Muslims

The Prophet ﷺ said: “Other nations will soon summon one another to attack you just as people invite others to share their dish.” Someone asked: “Will that be because of our small numbers at that time?” He replied: “No, you will be numerous at that time, but you will be like particles of waste that are seen upon a torrent. Allah will remove fear of you from the hearts of your enemy and cast feebleness into your hearts.” Someone asked: “What is feebleness, O Messenger of Allah?” “Love of worldly things and hatred of death,” he replied. (Grading: sahih, in Abu Dawud)

The Prophet Muhammad ﷺ informed us that the roots of these calamities lie in diseases in the souls of individuals. The severe consequences of these diseases are like branches which spring forth from these roots. May Allah cure the Ummah of these diseases.

Allah Himself alludes to this in the Qur’an in Surat al-Shams. Firstly, He swears by things which have an effect upon our cosmos: the sun, the moon, the day, the night, the heavens and the earth, then He swears by the human soul as if to say that this too is one of the forces that has an influence in our lives. In the response to these oaths ‘success’ and ‘failure’ are made dependent upon how man deals with his own soul. Allah says: Truly he who purifies it, succeeds, and he who corrupts it, fails.

The Quranic remedy and solution to these calamities is purification of the soul. What we need today is the courage to confront this reality. We must not allow our lower selves which command us to commit evil to make light of this reality. We must not let ourselves flee from confronting it under the pretext of being too preoccupied with solving the seemingly greater problems of the ummah.

May Allah implant taqwa in our souls and purify them; He is the best able to purify them and He is the soul’s Guardian and Master, the Possessor of Majesty and Generosity