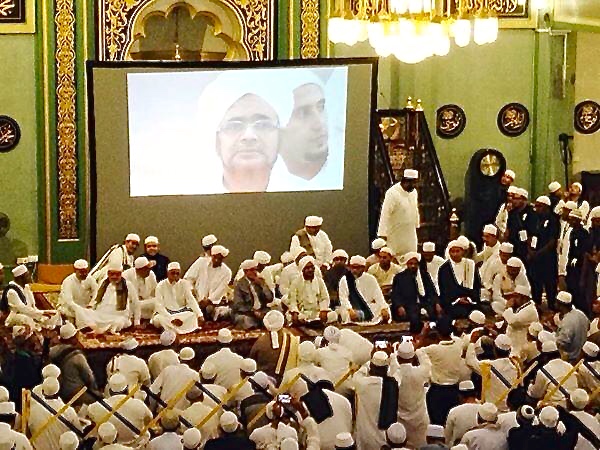 Sayyidi Habib Umar bin Hafiz encourages us to hold fast to the Rope of Allah.

Many people in this day and age, believers and disbelievers alike fear death, illness, trials, imprisonment due to breaking the law, poverty, and so forth. Yet, when we reflect carefully upon all these fears, we would realize that each one of these fears is in the domain of Allah. No single human being dies except that his or her death has been ordained by Allah. No morsel of food and no sip of water enter anyone’s mouth except that it is by Allah’s will.

Nobody falls under the authority of a just person or a beast, except that the matter has been preordained by Allah. If He wills that a trial befalls one, then it is solely by His permission. Who then should we really fear? Everything humans fear has an appointed time and everything returns to Allah. He is the One Whom we should love and long for.

Look at the blessing of eyesight. Everyone in attendance has been blessed with the ability to see. No political party, organization, company, country, hospital created our eyesight for us. Similarly our hearing, our hearts, our digestive system, our limbs—everything is created by Allah Most High. How then could created beings forget their Creator? How can we then disobey Allah when He has blessed us with all these bounties? We were brought out of our mothers’ wombs knowing nothing and we were created so that we may show thanks and gratitude to Him.

One of the best things a man can ask Allah is for a good ending. We must beware of falling prey to the things that would take the light of faith out of our hearts, which is disrespecting Allah, His religion and the sunnah of the Prophet ﷺ, disrespecting and showing enmity to his inheritors; the scholars and those beloved to Allah.

Allah says: “Hold fast, all together, to the Rope of Allah.” The scholars mention five interpretations of the term, “rope”:

The fifth meaning encompasses all the previous meanings mentioned. It is through our Prophet ﷺ that we are able to reach Allah, as Allah Himself has mentioned that the Prophet ﷺ is the door to Allah. May Allah give us the ability to follow the Prophet ﷺ and his guidance.

It is the responsibility of the Muslim Ummah to understand the reality of the rope of Allah and to spread this message to the people around us.

Our Prophet ﷺ is mercy, a blessing to all creation. Allah says: “We have not sent you but as a mercy to all the worlds.”

Our beloved Prophet ﷺ not only showed mercy to the believers, but also to those who do not believe and even to those who showed enmity to him. Look at the hadith of the moths and the fire. One meaning of the fire here is the dunya, our lower selves and our desires. Allah sent the Prophet Muhammad ﷺ to save mankind from destruction and the Hellfire. When we give preference to things other than Allah, we are essentially bringing ourselves to destruction.

Look at the story of the Prophet ﷺ at Ta’if. The angels guarding the two mountains were ready to destroy the people of Ta’if who had cursed and stoned him, and yet our Prophet ﷺ had hoped that from their progeny would come forth people who worship Allah and would be close to Him. Similarly, at the battle of Uhud, when the Prophet ﷺ was injured, he prevented his Companions from cursing the Quraysh and instead prayed for their guidance.

No justice is like the justice that Prophet Muhammad ﷺ showed. No country exists today that treats prisoners of war the way Prophet Muhammad ﷺ treated his prisoners and those who showed enmity to him. People today champion human rights, yet the very same people violate the rights of many people in this world. The Prophet ﷺ taught us the reality of human rights. He commanded those in charge of the prisoners of war to feed them with food that was better than what everyone else, including what the high-ranking commanders ate. This was the kindness he displayed in his dealings with disbelievers who had showed enmity to him and fought against him. There is no doubt that he treated disbelievers who were not hostile towards him with more kindness and he treated Muslims with more kindness still.

It is important that we cultivate love and mercy among ourselves and those around us, Muslims and non-Muslims. The Prophet ﷺ taught us that to break off relations with another Muslim for more than three days is impermissible and can cause one to be punished in Hell. What then can we say about those who curse other Muslims and accuse them of disbelief? One Prophetic tradition, which is sound, says that cursing and calling another Muslim a disbeliever is akin to murder. It is therefore necessary that we understand our religion well by following our scholars so that we may hold fast to the rope of Allah.

From here we understand the differences of the four madhahib. We see how the ulama show compassion to one another. All of the founders of the four schools are connected to the family of the Prophet ﷺ through Imam Ja’far al-Sadiq. Imam Abu Hanifa studied under Imam Ja’far al-Sadiq for two years and had said that if it weren’t for these two years, he would have perished. Imam Shafi’i received a sanad from Imam Malik, who had received his sanad from Abu Hanifa. Imam Ahmad bin Hanbal, in turn, received sanad from Imam al-Shafi’i. Hence, like a tree, the four madhahib are connected to the Ahl al-Bayt. The scholars of the Ahl al-Sunnah and Ahl al-Bayt are all connected.

May Allah Most High grant us etiquette with the scholars, and bless us with the realities of faith and steadfastness in holding onto the rope of these realities in our daily lives. May He purify our hearts and grant us steadfastness and may He allow us to give preference to Allah and His Beloved over everyone and everything else.