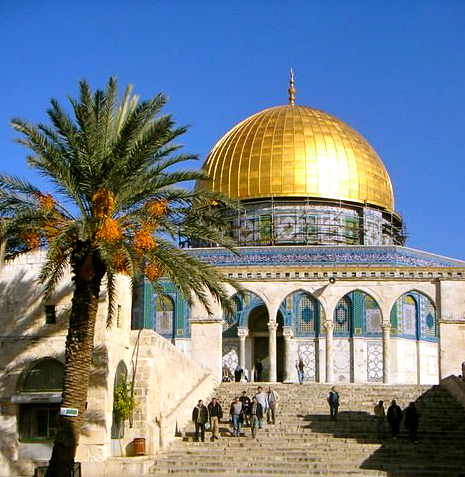 Sayyidi Habib Umar bin Hafiz (may Allah protect him and benefit us by him) reflects upon the Isra’ (Night Journey) and Mi’raj (Ascension). A summary of several lectures on the topic.

We are approaching 27th Rajab, the night on which the Islamic world traditionally celebrates the Isra’ (Night Journey) and Mi’raj (Ascension) of our Prophet, the Chosen One ﷺ. The Isra’ and Mi’raj was a great sign and an immense miracle which Allah gave to the Master of the people of the heavens and the earth, to demonstrate his superiority over mankind, jinn-kind, angels and the whole of creation. There are great lessons in the events that took place and a means of increasing in belief and certitude. The scholars say that the best night in relation to the Ummah as a whole was the night on which the Prophet was born, whereas the best night in relation to the Prophet himself was the night of the Isra’ and Mi`raj.

Prior to this night, the Prophet had displayed great patience in the face of hardship and it is one of Allah’s wisdoms that He bestows His gifts accompanied with hardships. Allah says: They encountered suffering and adversity and were shaken such that the Messenger and those of faith who were with him said: “When will Allah’s assistance come?” Truly Allah’s assistance is always near.[1] At the end of his life, the Messenger of Allah said that the worst treatment that he received from the disbelievers was his violent rejection at the hands of the people of Ta’if. Most of the scholars of the Sirah say that the Isra’ and Mi’raj took place shortly after this, a year prior to the Hijrah on the 27th night of the month of Rajab.[2]

The Prophet ﷺ saw some of the events of the Isra’ and Mi’raj in his dreams as a preparation for them before the events actually occurred. Some people claim that all the events of the Isra’ and Mi’raj took place in a dream state but this is not the case: the Prophet experienced them with his body and soul. Had the Isra’ been merely something the Prophet experienced in his dream, the disbelievers of Quraysh would not have had difficulty accepting it. They would not have asked: “How can you have travelled to Jerusalem last night and be with us in Makkah this morning?”

Allah says: Transcendent is the One Who caused His slave to travel by night from al-Masjid al-Haram to al-Masjid al-Aqsa.[3] Allah tends to express His transcendence before mentioning a great affair that is beyond what people are accustomed to.

When Allah wished to speak to Sayyiduna Musa, He told him to wait thirty days and then a further ten days: We appointed for Musa thirty nights and we completed (the period) with ten more.[4] Allah, however, did not tell His Beloved to wait. Rather His order came suddenly, without any warning. The Prophet’s chest was split open and his heart was washed and filled with knowledge and forbearance. The Buraq was then brought to him. Allah could have caused him to travel without the Buraq, but it was a means of honouring and ennobling him. Jibril said to the Buraq after some initial obstinacy: “Are you not ashamed, O Buraq? By Allah, no one nobler in the sight of Allah has ever ridden you!”

The Prophet stopped in a number of places on the Isra’ to emphasise the importance of visiting the places in which Allah bestowed His bounties upon His pious slaves. He was ordered to seek to draw close to Allah by praying near the tree where Allah spoke to Musa, by praying at Mount Tur, where Allah gave revelation to Musa, and at Bayt Lahm, where Isa was born. The whole earth was made a place of prayer and prostration for the Prophet so what was the significance of him praying in those places if it was not seeking blessings (tabarruk) and spiritual assistance from them? It is also narrated in Sahih Muslim that he visited the grave of Musa and witnessed him praying in his grave. He said to his Companions: “If I was there I would have shown you his grave.” He was thus teaching his Ummah the importance of knowing the location of the graves of the Prophets and thus the importance of visiting them.

He was called a third time, and once again he did not respond. Jibril informed him that it was the dunya or the material world calling him, and had he responded, his Ummah would have chosen this life over the next. The dunya then appeared to him in the form of an old woman. Jibril informed him that all that remained of the life of this world before the Day of Judgement is like the time this old woman had left to live. We witness all the wars and struggles that take place and in reality, this life is like an old woman on the verge of death and ahead of us is the next life! May Allah give us the best of endings! Due to the Prophet’s refusal to respond to the callings of the dunya, there remain to this day people who know its worthlessness.

The Messenger of Allah ﷺ led the Prophets in prayer in al-Masjid al-Aqsa. Jibril informed him that the soul of every prophet sent by Allah from the time of Adam to the time of Isa was brought to pray behind him so that they would come to know the station of their master, Muhammad. He was the imam who led all the prophets and angels in prayer. Should we not make him our imam?

The Prophet then ascended from heaven to heaven. The angels in the heavens had been informed that he would come and it was their opportunity to be honoured by meeting him just as his Companions had that honour on the earth. The people of the earth threw stones at him and insulted him but the people of the heavens gave him the warmest of welcomes. In the Prophet’s meeting with his father Adam and the other Prophets in the various heavens, there is a lesson. In spite of the Prophet’s superiority over them, he was still ordered to greet them. There was no one less in need of anyone else than him but he met them and displayed great etiquette and manifested his slave-hood to his Lord.

Among the things he witnessed were people who turned down freshly cooked meat and chose to eat putrid rotting meat. He was told that this was like those who leave that which is lawful and choose that which is unlawful. He saw people’s heads being smashed with rocks. As soon as their heads were smashed they would be restored and then smashed again and so on. He was told these were the people who were too lazy to pray the obligatory prayer.

He ascended to al-Bayt al-Ma’mur, which resembles the Ka’bah above the seventh heaven. It lies directly above the Ka’bah, and every day 70,000 angels enter it. The Prophet entered it and prayed in it, along with the spirits of some of the elect of Allah. Then he came to al-Sidrat al-Muntaha, a tree whose size and beauty is indescribable. Were one of its leaves to fall it would cover the heavens and the earth. This is the endpoint of the knowledge of creation. It was here that Jibril stopped. He said that if he went any further, he would be burnt up so he told the Prophet to continue his journey alone. The Messenger duly ascended to the Throne of Allah and fell into prostration. Musa had been ordered to remove his sandals when Allah spoke to him, but the Beloved was not ordered to do so. Allah then ordered him to raise his head and he addressed Allah: “Greetings, blessings and the best of prayers to Allah.”

Allah responded: “Peace be upon you, O Prophet, and the mercy and blessings of Allah.”

At this point, when Allah was manifesting Himself to him, the Prophet wished to remember the pious members of his Ummah and the previous nations. He said: “Peace be upon us and upon Allah’s pious slaves.”

The angels of the heavens then cried out: “We testify that there is no deity other than Allah and that Muhammad is His slave and messenger.”

When Allah spoke to him, He said: “I have taken you as My beloved and I have expanded your heart and raised high the esteem in which you are held so that whenever I am mentioned you are mentioned with Me. I made your nation the best of nations and I made them the last and the first on the Day of Judgement. I made you the first prophet to be created and the last to be sent.” Allah thus spoke gently to His Beloved and reminded him of His blessings upon him. He said things to Him which only He knows.

He made fifty prayers compulsory on his nation. This was eventually reduced to five with the reward of fifty. Are those who are unable to perform the five not ashamed of their Lord? What would they have done if it was fifty prayers that they had to perform? Allah made five prayers compulsory upon His slaves, in which there is the opportunity to converse with Allah and draw close to Him. The Prophet told us: “The closest the slave is to his Lord is when he is in prostration.”

Sayyiduna Musa was keen to receive some of the light that was on the face of the Prophet ﷺ who himself had just seen his Lord. Musa had asked to see Allah while on the earth but his request was not granted. He thus took as much light as he could from the Prophet’s face. The Prophet ﷺ informed us that there will come a time when the Muslims will seek victory through people who had seen him, and later through people who have seen people who have seen him.[5] This shows us that secrets are transmitted through the vision of people’s faces.

The Messenger of Allah ﷺ remained firm while witnessing all the things that he witnessed: His vision did not stray, nor did it go wrong[6]; His heart did not lie about what it saw, for truly did he see, of the signs of his Lord, the greatest.[7]

All of this took place in a few instants. So little time had elapsed that the place where he had been sleeping was still warm. All of these are amazing examples of divine power. We are so accustomed to the pattern of cause and effect and the laws of creation that we tend to forget the presence of divine power in everything. In reality, the things which we regard to be normal are miraculous – our sitting and standing, our eating and drinking. Allah says: Do you see the water which you drink? Did you bring it down from the clouds or did We?[8]

May Allah bestow prayers upon the one who made this awesome journey and may He resurrect us with him. Make us among those who are truthful in their following of him. Do not deprive us of the vision of him in this life, the Barzakh and the next life. Allow us to see the face of the one who You allowed to see Your countenance so that we are ready to see Your countenance in the abode of Your pleasure.

[2] In the Islamic calendar the night precedes the day, so what is meant is the night before the 27th day