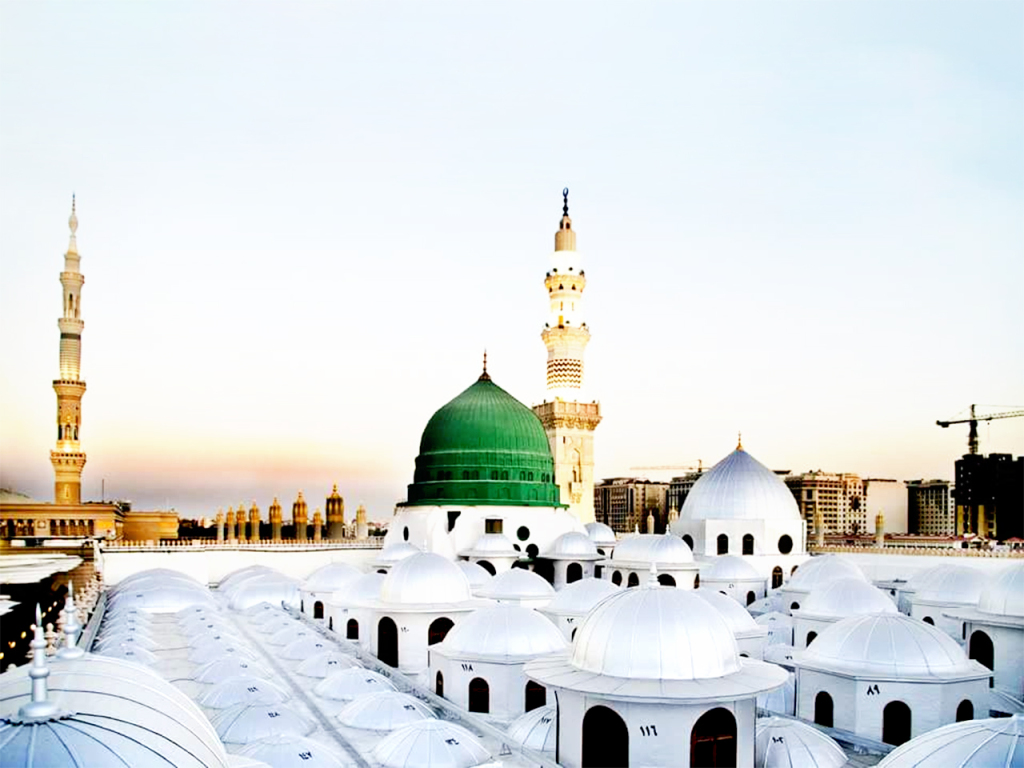 Advice given by Sayyidi Habib Umar bin Hafiz (may Allah preserve him and benefit us by him) to a group from Dar al-Mustafa traveling to perform `Umrah and Ziyarah, 25th of Jumada al-Akhirah 1435 / 25th of April 2014.

Allah says: If someone venerates the sacred things of Allah, this is truly a sign of piety in the heart.1 The five most sacred things are the Prophet ﷺ, the Ka`bah, the Qur’an, the five prayers and Ramadan. The Prophet is the most sacred of these things. Thus nothing is more pleasing to Allah than for us to go to him, since he is the most beloved of Allah’s creation to Him. However great the Ka`bah or the Throne is in Allah’s sight, nothing can compare to the greatness of the Prophet ﷺ.

If someone told Habib `Abd al-Rahman al-Mashhur that they were going to perform Ḥajj, he would correct them saying: “Say I’m going to visit the Messenger of Allah ﷺ. Had it not been for him we would not know what the Ḥajj was.”

The Prophet ﷺ is the greatest means to reach Allah. Habib `Alawi bin Shihab would always say that he wanted someone to present his case and the case of the Ummah in person to the Beloved ﷺ. So remember the Ummah in that place.

You will be unable to repay your Prophet, my son, even if you came to him walking on your eyes

When you visit him, renew your covenant to serve him, his sunnah and his Ummah.

If someone is going to visit Allah and His Messenger ﷺ , it is only fitting that their actions, words and intentions be pure (tayyib). The Prophet is tayyib and Allah is tayyib and only accepts that which is tayyib. You should thus be concerned with showing correct etiquette (adab), having good character, serving those who you are travelling with and spending your time in remembrance and reflection. You should lower your gaze and also keep your inner sight focused so that you are not distracted by anything.

Do not object to anyone’s behaviour with your tongue or your heart in either of the Two Sanctuaries. Maintain a good opinion of everyone, because there are many people of Allah in both Makkah and al-Madinah and most of them are concealed.

The son of one of the pious was about to go to perform Hajj. The parting advice of his father to him was not to find fault with anyone that he saw during his Hajj. As soon as he entered Makkah, he saw an old man performing wudu’ incorrectly. He began to point out the man’s mistake to him but the man turned to him and said: “Have you already forgotten your father’s advice?”

Allah has put certain people in positions of authority over the Two Sanctuaries for a limited period of time. If they tell you to do something, then obey them without objection. Behave at all times with tranquillity and dignity.

When the area close to the Prophet’s grave was crowded, Habib `Attas al-Habashi would sit at a distance, in a place where there is now a door called Bab al-Baqi`. He would say that true proximity is not physical, but rather it is the proximity of the soul.2 It was in this area that the Messenger of Allah ﷺ received revelation.

There are a number of historic places in both Makkah and al-Madinah. Many of these blessed places have been destroyed but their light has not been extinguished.

Some of these places have been incorporated into the two great mosques. The grave of the Prophet’s father, Sayyiduna `Abdullah bin `Abd al-Muttalib, and the well Bayruha’3, for example, now lie within the Prophet’s Mosque.

The house of Sayyiduna `Ali and Sayyidatuna Fatimah is inside that same enclosure. Behind the enclosure is Mihrab al-Tahajjud, where the Prophet ﷺ would pray the night vigil prayer. It is now screened by shelves containing copies of the Qur’an.

If someone stood in the Rawdah and swore an oath that they were in Paradise they would not break their oath.

We can remember the grave of Imam `Ali al-`Uraydi4 and the mosque and ribat (school) next to it. The authorities later destroyed everything and turned the area into a wasteland.

The resting place of Sayyidatuna Khadija is in al-Ma`la in Makkah. Her grave is opposite the last window but one on the left. Next to her is her son, al-Qasim, and nearby is the place that the Prophet ﷺ pitched his tent when he returned to Makkah. In the same area is the grave of Habib Muhammad bin `Alawi al-Saqqaf, one of the spiritual guides of Imam al-Haddad.

If you face the Ka`bah between the two Yemeni corners, you will also be facing the Prophet’s Mosque and al-Masjid al-Aqsa, because they are all in one straight line.

You should return infused with a new light. Only your body should return from your trip. Your heart and soul should remain forever in those blessed places.

3 A well belonging to Abu Talhah which the Prophet used to drink from. Abu Talhah then gave it away for the sake of Allah, which greatly pleased the Prophet.