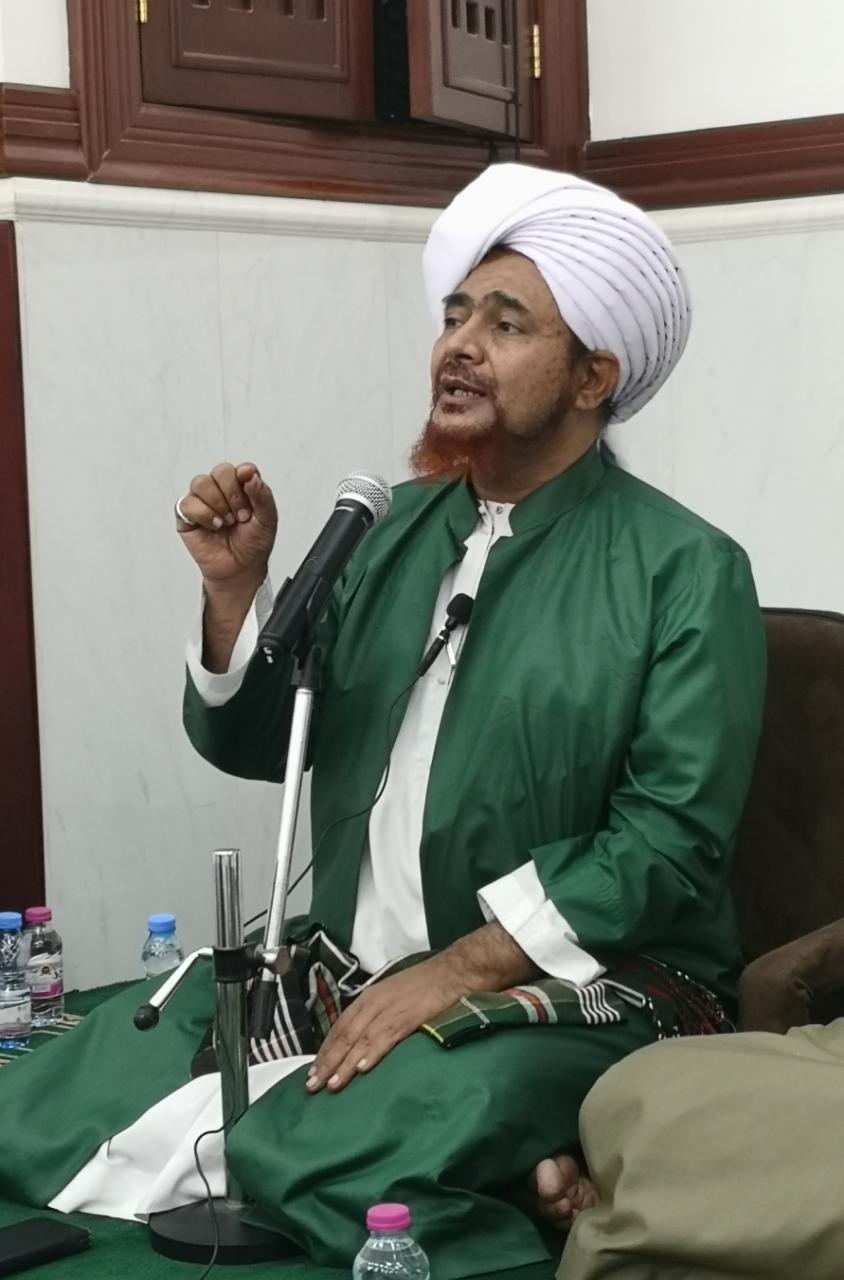 On the 17th of Ramadan, we commemorate the Battle of Badr, which took place on that day in the second year of the Hijrah. It is one of the most important events in the history of the Ummah, and Allah describes it as “the Day of Decision.” Sayyidi Habib Umar bin Hafiz (may Allah protect him and benefit us by him) places great emphasis on commemorating it and marks the event by completing the Qur’an in Tarawih on the eve of the 17th, after which there are big celebrations in Dar al-Mustafa attended by thousands. The rest of the night is spent in prayer, remembrance and supplication, since prayers are answered when the Qur’an is completed.

Habib Umar reflects upon some of the lessons we can learn from Badr. Extracts from a Friday khutbah, Masjid al-Rawdah, Tarim 12th Ramadan 1432 / 12th August 2011.

He began by praising Allah and bestowing prayers upon the Messenger of Allah. He then enjoined people to have taqwa, attaining which is one of the aims of fasting and the wisdom behind Allah making it compulsory upon us.

The realities of taqwa which the Imam of the People of Taqwa ﷺ and his Noble Companions possessed were made manifest in days such as these in the second year of the Hijrah. In Sha’ban of that year, both fasting and Zakat were made compulsory. The Prophet and his Companions then began fasting Ramadan in intense heat. On a day similar to this all those years ago, your Prophet left his family and home and went out to Badr with around 313 of his Companions. Why did he go out? To give victory to the religion of Allah and to convey the message of his Lord. In spite of the heat and the difficulty of the journey, he continued fasting on some days but he also broke his fast on other days.

On the expedition he shared a camel with Sayyiduna `Ali and Sayyiduna Mirthad bin Abi Mirthad and they each took it in turns to ride while the other two walked. They said to him: “O Messenger of Allah, you ride and we will walk.”

He replied ﷺ: “Neither are you stronger walkers than me nor am I in less need of the reward than you.”

Here he taught us several lessons. He taught us a lesson in sacrifice and in negation of pride and satisfaction with one’s actions. He displayed his need for the reward of Allah, in spite of the fact that even if he had ridden and let them walk, he would have received the reward for their actions because he was the one that guided them to Allah. O believer, this is the Best of Creation saying: “Nor am I in less need of the reward than you.” Do you think you are not in need of the reward of Allah such that you leave prayers which you are able to perform or gatherings of remembrance which you are able to attend? You are in need of the reward of every action in Ramadan specifically and in the rest of your life. So expend your efforts – try to reflect upon the Qur’an and to attend the gatherings of remembrance. It was the custom of the early Muslims to hold gatherings after praying Tarawih and Witr in which the attributes and etiquettes of the Chosen One were mentioned.

None of the Companions that went out expected to go into battle with Quraysh but Allah wished to ennoble those great people. The Angel Jibril later asked the Prophet ﷺ how he and his Companions regarded the people of Badr. He replied: “They are the best of us.” Jibril said: “Likewise we regard the angels of the heavens that attended Badr as being the best of us.” They attained this rank because they gave victory to the best of people in the sight of Allah ﷺ.

People naturally tend to choose that which is easier for their souls to bear but beyond that easier choice there may be something greater awaiting. If Allah then decrees something which is harder for the soul to bear the believer gains felicity by being content with the decree of Allah in the knowledge that this is better for him. Sayyiduna `Ali said: “If the veil were to be removed you would only choose what has already been decreed.”

Allah promised you one of the two groups that it should be yours. You wished that the unarmed group should be yours, but Allah willed to establish the truth according to His words, and to cut off the roots of the disbelievers.1

The Companions succeeded because of they had the love of Allah and His Messenger in their hearts. Twelve nights of Ramadan have passed and you have not yet understood this concept. Ramadan has only come so that you can be elevated. This love is the foundation of victory and of honouring one’s covenant with Allah. We witness this in the words of the Companions on the approach to Badr. The Messenger of Allah wished to hear their opinions after it had become clear what they were confronting.

Sayyiduna Sa`d bin Mu`adh said: “We believe in you and bear witness that your message is the truth. Go forth to perform what Allah has commanded. Perhaps you wished something and Allah willed something else. Make war with whoever you wish and make peace with whoever you wish and we are behind you. Take from our wealth what you wish and leave what you wish, and what you take is more beloved to us than that which you leave. By Allah, if you took us to the sea and then plunged into it, we would follow you. You have left behind people (in Medina). Our love for you is not more intense than their love.” They knew that love of Allah and His Messenger was the foundation of their defence of truth and guidance. “Had they known that there would be fighting not a single man would have stayed behind… perhaps Allah will show you in us that which is a joy to your eye, O Messenger of Allah.”

When the Prophet heard this his face lit up like a piece of the moon.

He said: “Go forth with good tidings for Allah has promised me one of the two groups – either the caravan or the army. It is as if I can see the exact places where Quraysh will fall.”

He subsequently pointed out those exact places the day before the battle.

Look at the disparity between the two sides. The Muslims only had eight swords, two horses and seventy camels, each of which three people shared. The Quraysh, on the other hand, had hundreds of swords and spears, two hundred horses and they would slaughter nine or ten camels a day for food not to mention the camels that were being used to carry the army. The Quraysh approached arrogantly boasting about how they would defeat the Muslims. This is characteristic of the people of opposition to Allah, and those heedless of Him. The Muslims, however, approached in a state of humility and fear of their Lord, and Allah duly raised them.

In the second khutbah, after praising Allah and bestowing prayers upon the Messenger of Allah, Habib `Umar once again enjoined people to have taqwa. He said if you clothe yourselves in taqwa you will attain the secrets of fasting, the illumination of the night prayer and the reality of the transaction with Allah.

With true love for Allah and His Messenger you will be able fulfil the commandments of Allah and gain victory over your lower selves, over your desires and caprice, over this deceptive worldly life and over those who disbelieve from the devils of mankind and jinn.

Among the Companions were youths, some of them only fifteen or seventeen years old. One of those was Sayyiduna Harithah, who was one of the fourteen Companions martyred at Badr. His mother came to the Messenger of Allah ﷺ upon his return to Medina.

She asked him: “Where is my son? If he is in the Garden I will be content but if not you will see how I behave!”

The Messenger of Allah said to her: “Umm Harithah, do not be foolish – it is not one garden, but many, and your son has entered the highest garden of Firdaws!”

O people who are planning for the future, is there any future greater than this? Let us make firm the foundation of love so that we follow the path of those Companions, may Allah be well pleased with them.

O Allah we love them for Your sake so show us their faces on the Day of Judgement and in Paradise.

Let there be nothing in our houses that displeases Your Prophet Muhammad, whether it be on our screens or in our behaviour. Help us to give this month its due and enable us to follow the Chosen One, honouring the covenant between us and You.

Invoke abundant blessings upon him because this is what will bring you close to him on that day. He said: “The closest people to me on the Day of Judgement are the ones who invoke the most blessings upon me.”

1 Al-Anfal, 8:7 What is meant by the “two groups” is the caravan led by Abu Sufyan, which the Muslims had originally set out to intercept, and the army which Quraysh sent out from Mecca. The Muslims naturally did not wish to come up against a fully equipped army.