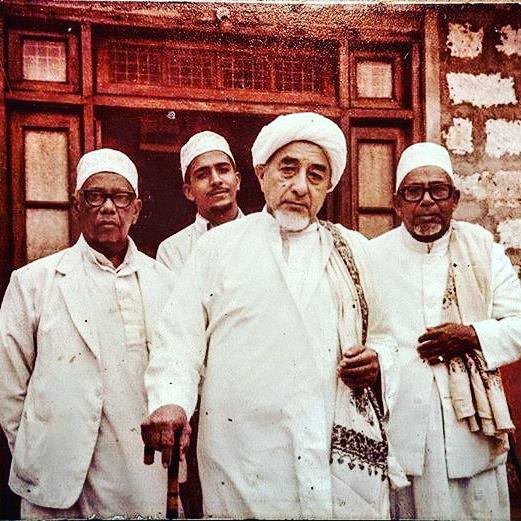 Habib Ahmad Mashhur al-Haddad was widely acknowledged as among the leading scholars and spiritual masters of the twentieth century. He was born in a town in Hadramawt, in southern Arabia. At an early age he committed the Quran to memory and spent most of his time in the relentless pursuit of the various branches of religious knowledge. He dedicated his life to teaching and spreading the word of Islam. He died in Jeddah, Saudi Arabia in 1995.

Shaykh al-Haddad, religious counsellor to ministers and paupers alike, was a rare living embodiment of traditional styles of da’wa. He was a founder member of the Muslim World League, but never accepted money for his services to Islam. Running a small business in East Africa, he lived to obey Allah’s injunction to bring Islam to all people.

One week he would almost be eaten by crocodiles during a mission to the Pygmies of Western Uganda; the next he would be using his fluent Swahili to defeat the Ahmadiyya cult in a vast public debate in Kampala. Not a second of his life was wasted: his annual Hajj, his regular teaching of Shafi’i fiqh at the houses of friends in Jeddah, his support for new madrasas, his Mawlids in Mombasa mosques which caused the conversion of so many: every moment was filled with the remembrance of Allah, and the quest for still greater learning. Even in advanced old age, weighed down by illness and deeply distressed by the war in Bosnia, he insisted that his house remain open seven days a week, every day of the year, for those who wished to sit with him, and absorb some of his learning and the subtle blessings of his company. And when his guests left each evening, he would rest only briefly, before beginning his long nightly vigil of Qur’anic recitation and tahajjud. Having travelled with him, I know that he rarely rested for more than two hours a night.

Shaykh al-Haddad was distressed by even slight variations from the Sunna. His house and household, his wives and great grandsons, all lived in the radiance which only the full Sunna can bestow. Part of this, for him was his dislike of any criticism of other Muslims, whatever their tendency, or however grievous their faults. Anyone voicing such criticism would be discouraged in his gatherings from continuing to speak. The reputation of all Muslims, as one of his favourite hadiths affirms is sacred and inviolable. It is estimated he administered between 20-30,000 shahadas.