When water is mixed with other substances it takes on the properties of those substances and is thus no longer fit to be used for purification. When it is mixed with impure substances it becomes impure. Likewise we must be careful who we mix with so that we do not take on negative attributes and lose our purity.

A small amount of water easily becomes impure, but when more water is added to it until it becomes a large amount, it is now pure and can be used for purification. For that reason Islam encourages us to come together for worship. When there are a large number of us our impurities are diluted until they are no longer manifest. 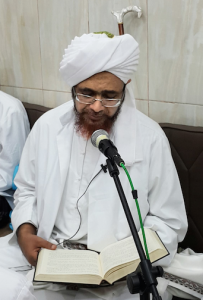 O Allah, O Self-Existing, bestow abundant prayers and peace upon Your slave and beloved, our Master Muhammad, the Prophet who stands up for the truth and upon his Family and Companions, and by him set me straight upon Your straight path.

What can be recited for a headache?

Put your hand on your head and recite Surat al-Qadr and the last four verses of Surat al-Hashr in the morning and evening.

Does someone have to visit Tarim in order to attain the attributes of the great Imams of the past?

This is one of the means to do so but what is required above all is complete determination and true focus on the path regardless of where you are in the world. The only time when it is compulsory to travel is to perform Hajj (if it is incumbent upon you) or to seek knowledge which it is compulsory for you to learn. Travelling to visit the pious, to visit blessed places and to seek other types of knowledge is recommended. In general travelling is permissible, unless it is undertaken for something that is forbidden, in which case it is forbidden. The Prophet ﷺ informed us that the Jewish scholar told the man who wished to repent to leave a land inhabited by evil people and to travel to a land inhabited by pious people. He informed us that Allah showed mercy to him due to his proximity to the land of the pious. This shows the merit of going to the places where the pious reside. 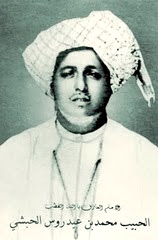 This salat was composed by Habib Muhammad bin Aydarus al-Habashi, may Allah have mercy upon him. Habib Muhammad was born in al-Hawtah, Hadramawt, but he later moved to Indonesia and died in Surabaya in 1337 (1919 CE). He was one of the closest students of Habib Ali al-Habashi, and he is responsible for compiling Habib Ali’s salawat in the book, Majma` al-Lata’if al-`Arshiyah. 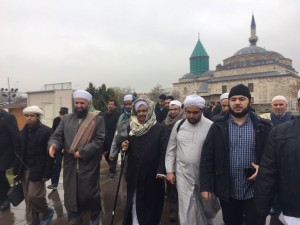 Sayyidi al-Habib `Umar bin Hafiz (may Allah protect him and benefit us by him) reflects upon the meaning of being with Allah and His Messenger ﷺ.  Extracts from a lesson in Ihya `Ulum al-Din in Dar al-Mustafa, Tarim, on 9th Rabi` al-Awwal 1436 /31st  December 2014.

The Messenger of Allah ﷺ said:

“A person is with the one they love.”

Thus you can gauge your love for Allah and His Messenger by gauging how much you are with them.

The Prophet was in the highest state of being with his Lord. For that reason he said:

Sayyiduna Ibrahim says in the Qur’an that it is his Lord:

“Who created me and it is He who guides me; Who gives me food and drink.”[1]

He was constantly with Allah, even when he ate and drank. One of the knowers of Allah said:

The Companions and the pious people of this Ummah were constantly with the Messenger of Allah ﷺ in all their states.

One of the Companions repeated three times, addressing the Prophet  ﷺ:

“I love Allah and His Messenger!”

He replied ﷺ on each occasion:

“You are with the one you love.”

“If the Prophet ﷺ was absent from me for an instant I would not consider myself a Muslim.”

“How can he be absent from us when he is the source of our existence?”

In other words, without him, we do not exist.

‘I receive from my grandfather, the Messenger of Allah, care, status, assistance, inheritance and preferential treatment.’

These people reached the highest stations of being with the Beloved ﷺ .

Some people reach high stations in closeness to the Beloved ﷺ before the month of Rabi is over. If you are not going to attain it in this month, then when?

If we come across a new dhikr or dua should we take permission before reciting it?

After giving birth I have not been able to be consistent in my awrad and other acts of worship. What can I do to maintain my spiritual progress?

You should realise that raising your children is a type of worship so you should make a good intention in raising them and intend to follow the Prophet ﷺ in doing so.

You should take a moderate path – not neglecting the awrad completely and not trying to do too much. Rather you should do that which is easy for you to maintain. You will still be rewarded for that which you are unable to do.

Recite this 40 times a day:

O Living, O Self-Existing there is no deity save You

Recite this verse 100 times a day:

He is Allah, there is no deity save Him, Knower of the unseen and the seen, He is the All-Compassionate, the All-Merciful.[1]

Recite the du`a of Imam al-Haddad several times a day:[2]

O Allah, remove from my heart any love for the material world and any status I may afford to people which cause me to disobey You or distract me from worshipping You or come between me and attaining special knowledge of You and sincere love for You.

[2] In the Khulasah, Habib Umar suggests reciting it after every prayer