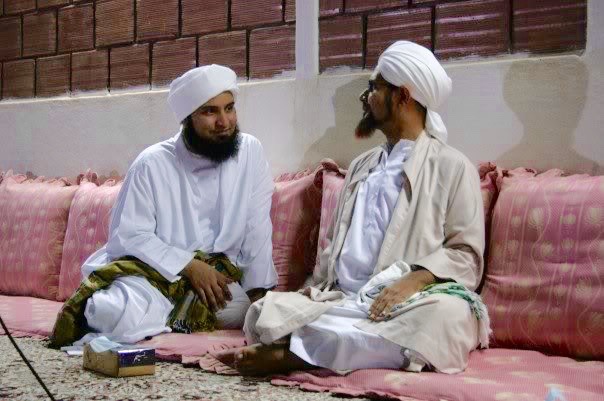 Sayyidi Habib Ali al-Jifri (may Allah preserve him and benefit us by him) derives lessons from the life of Hababah Zahra bint Hafiz al-Haddar (may Allah have mercy upon her).

Every soul will taste death, and surely you will only be paid your reward in full on the Day of Resurrection. Whoever is taken away from the Fire and admitted to Paradise, he indeed is successful. What is the life of this world except the enjoyment of delusion? (3:185)

The Ummah of Muhammad has recently lost a light which illuminated the path for those who love Allah and seek Him. Allah has made those that have direct knowledge of Him a means of protection for the people of their time. By them Allah brings people’s hearts to life and by them people return to Him and repent. One of the people that Allah chose for this immense role was the knower of Allah, Hababah Zahra bint Hafiz al-Haddar.

She married the Imam, the knower of Allah, the Mujahid, Habib Muhammad bin Salim bin Hafiz at a time when he had little wealth. She married him because he was a man of knowledge, a caller to Allah and someone who remembered Allah constantly. They used to live in a single room. Her husband’s time was filled with teaching students: he had up to sixteen lessons in the course of the day and night. When students came to his house for a lesson at midday, she would happily go and sit on the roof in the heat and wait there sweating until they left. This is one manifestation of her standing by her husband in the service of this religion and being content with a few material things. We are in need today of understanding these concepts.

Allah made her content with her circumstances. She was aware of the greatness and importance of delivering the message of Allah to people and transmitting to them the legacy of His beloved, the Chosen One ﷺ. She received knowledge from her husband and was known for her scrupulousness and uprightness. The nights bear witness to her standing in prayer at length and the days bear witness to her numerous fasts. Her gatherings were filled with the remembrance of Allah, worship and knowledge. There was no mention in them of worldly affairs and no tale-bearing or backbiting. If something bad was said about someone in her presence she would cut off the person speaking and remind everyone of Allah. This was the state of her heart.

Habib Muhammad spoke out fearlessly against the things that he witnessed taking place in Hadramawt at the time. The socialist regime which had seized power promoted atheism, oppressed the people and unlawfully confiscated their wealth. In one of the final public gatherings that Habib Muhammad attended he had no hesitation in mentioning these injustices, in spite of the fact that members of the regime’s militia were surrounding the gathering menacingly holding their weapons. Habib Muhammad was advised to refrain from speaking out for his own safety, but he would reply:

“What will I say to Allah in the Hereafter when He questions me?”

When he was performing Hajj for the last time his friend, Sayyid Abdullah bin Hasan al-Jifri, advised him to remain in the Hijaz until the situation improved in Hadramawt.

Habib Muhammad responded by saying: “Do you want me to leave the service of this religion? In whose hands will Tarim be if I do not return? The Companions of the Prophet ﷺ used to go from one land to another seeking martyrdom!”

He then returned to the blessed Valley of Hadramawt.

When Habib Muhammad was eventually abducted, Hababah Zahra bore a tribulation that even mountains would not have been able to bear. People would not dare to visit her in their home at the time out of fear of the militia, so she spent the days and nights alone. Her children were still young (Habib Umar was only eight or nine at the time), but she managed to raise them singlehandedly.

The years passed by and no one knew whether her husband was dead or alive. She would hear rumours that he was in a certain place and her son Habib Mashhur would go secretly at night to look for him. Just imagine these things! This is not just a story—these are real events that took place! Just imagine that your husband has been abducted and no one knows whether he is alive or dead. No one knows what state you are in. No one is there to provide your food and drink. No one dares visit you. She was secluded in her own home for many years, but she remained patient and content with her Lord’s decree. She did not decrease her worship in any way. Her patience and perseverance bore many fruits which we are now reaping. Habib Umar left Tarim and her heart remained attached to him until they finally met in the Hijaz years later.

I once had the honour of taking her to Sanaa for medical treatment. We were in the car and I unintentionally switched on a recording of one of Habib Muhammad’s talks. I turned it off out of fear that it would upset her. She said: “My son, why did you switch it off? Let us listen to it!”

She listened intently to her late husband’s words and was thoroughly engaged throughout the recording, uttering now and again: “May Allah have mercy on you!”

She was completely content with Allah’s decree. She was one of those people whose hearts are illuminated and are thus always ready to listen to advice. She was open to all goodness wherever she was, regardless of her grief or sadness. What is our state when we listen to reminders today? Do we receive advice with joy or with arrogance?

Her children were a source of joy and pride for her. Habib Mashhur became head of the Fatwa council in Tarim and Habib Umar returned to the city and established Dar al-Mustafa.

She always had immense concern for the affairs of her children and their extended family throughout her life. Despite his numerous engagements, Habib Umar would not allow a day to pass without visiting her to seek her prayer and her pleasure. Her other children would also consult her in all their affairs. In this there is a lesson for us with regards to showing proper etiquette towards our mothers.

Despite suffering from serious illness in her final years, she was still constant in her remembrance of Allah and patient in her ordeals. When I would ring her to ask her how she was, she would say: “Alhamdulillah!” and you could feel her contentment with Allah’s decree, despite the fact that she was in pain. She displayed brokenness and etiquette with Allah and a genuine humbleness free from pretence.

When I would ask her to pray for me, she would reply: “My son, what value is my prayer compared to yours? I am more in need of your prayer.”

Hababah Zahra would give generously even though she did not possess a lot. She would  give charity in secret to the poor people of Tarim. Each one of us must ask ourselves how much charity we give in secret, even if we do not possess a lot. The one who does not give when he has a little will not give when he has a lot. She would always make her visitors happy. They would feel her mercy and love. How do we receive guests? Do we receive them with joy, realising that to do so is an act of worship? She would honour her husband’s companions—the likes of Habib Muhammad al-Haddar and Habib Jaylani al-Mashhur—by sending them gifts.

She would listen to and engage with the lessons of Habib Mashhur and Habib Umar, because she longed to have complete knowledge of Allah. What is our portion of this sacred knowledge? What is the extent of our longing and desire to seek knowledge? In those days it was difficult to listen to lessons and it had to be done in secret. Students would conceal their books under their clothes and leave their houses in the last part of the night to come and study with Habib Mashhur.

The women of our time complain at the slightest difficulty and they easily get bored with lessons. This mother, this knower of Allah, however, helped people to seek knowledge in times of real hardship. Today there is no difficulty in preparing food or coffee when visitors come to the house. In her time these acts were potentially dangerous, since accommodating students was a matter of life and death. At times members of the militia would come to her house. They would call out to Habib Mashhur saying: “We know that you still teaching. You had better stop or else you will join your father.”

Habib Mashhur would continue his lessons and say to them: “Go ahead and kill me, I’m longing to meet my father.”

Hababah Zahra heard these threats but never discouraged her children from seeking and spreading knowledge. Instead she encouraged them to carry on serving the religion. Hababah Zahra also raised her daughters to be knowledgeable and pious women who themselves went on to raise scholars. Her daughter Hababah Khadijah’s son, Sayyid Muhammad bin Ahmad bin Sumayt, is a scholar and caller to Allah. He studied in Tarim and graduated from al-Azhar and now teaches in Dar al-Mustafa. Her granddaughters, the daughters of Habib Mashhur and Habib Umar, are also callers to Allah. Wherever they go, their knowledge travels with them. All of this is due to the blessings of Hababah Zahra.

Her heart was full of mercy but at the same time people were in awe of her. If someone behaved in an inappropriate way in her presence or did something that was displeasing to Allah, she would put a stop to it and everyone would listen to what she said. This is something we lack in our homes today. Our elderly womenfolk are beacons of light in our homes. When they have gone, no-one in the house remembers Allah between Maghrib and Isha or after Fajr until the sun rises. When they are present, many young people do not appreciate their presence in the home. Their presence is a protection, a blessing, a means of sustenance and a source of light for future generations if only we respect them and grant them their rights.

We ask Allah to have mercy on this noble Sayyidah, Hababah Zahra. May He raise her station and pour light and peace into her grave. May He bless her return to Him and unite her with her grandfather His Beloved ﷺ , her mother Fatimah al-Zahra and Khadijah al-Kubra, her predecessors and her husband Habib Muhammad bin Salim bin Hafiz. May He allow us to receive a portion of her light and steadfastness and allow us to receive the gifts and secrets that she received. May her progeny be a continual source of joy for her. May He enable our womenfolk to follow in her footsteps.

May our last words in this life be la ilaha ill’Allah Muhammad rasulullah.