The Ummah recently lost another of its great men, the knower of Allah, Habib Ali bin Muhammad bin Shihab.

Thousands turned out for his janazah in Tarim at Asr on Monday 23rd Muharram 1438 / 24th October 2016. Before the prayer, Habib Ali al-Mashhur bin Hafiz spoke briefly about Habib Ali’s patience and perseverance in calling people to Allah, the fruits of which he will now be reaping. Even blindness and frailness did not prevent him from guiding people. At times he would be carried on people’s shoulders to attend the annual visit of Nabi Allah Hud (peace be upon him). He was loved by all, even those who opposed his methodology.

Right until close to the time of his death, he would generously give his time to visitors who came to his humble house in Dammun on the edge of Tarim.

May Allah raise the station of Habib Ali and allow us to follow in his footsteps.

What advice do you have for someone involved in reconciling between conflicting parties?

This is a great thing and there is a great reward in it. Someone engaged in this should humbly plead with Allah for success and then he should surrender the affair to Allah. He should take people’s personalities and understandings into consideration so that what he says will be accepted by them.

Sayyidi Habib Umar bin Hafiz (may Allah protect him and benefit us by him) calls us to make a spiritual hijrah.

The new year always reminds us of the Hijrah. The physical hijrah is an obligation for those who are unable to freely practise their religion in the place they are in. They must find a place in which they can practise their religion. The angels say to those who fail to make this hijrah: ‘Was Allah’s earth not expansive enough for you to emigrate therein?’1

A person may be leaving that which is forbidden in one aspect of his life, that which is disliked in another aspect, that which is frivolous in another aspect and so on. If he perseveres he will eventually attain the greatest type of hijrah. Sayyiduna Ibrahim said regarding this: I am going to my Lord.2 Allah also said: So flee to Allah.3 The Prophet ﷺ said: “The most truthful word spoken by a poet is the saying of Labid: ‘Indeed everything save Allah is false.’”4

Jihad, like hijrah, has many manifestations but one of the greatest is the one mentioned in the hadith that: “the mujahid is the one who strives against his own caprice.”

4Narrated by al-Bukhari and Muslim

What should we mention when we talk about Sayyiduna al-Husayn at the time of Ashura?

We should talk about his upbringing and his character – his mercy, compassion and generosity. We should refer to the biographies of respected scholars from Ahl al-Sunnah. As for his martyrdom we can mention the fact that he requested one of three things from his killers: that he be allowed to return to al-Madinah or that he be allowed to go to fight jihad on the frontiers or that he be allowed to meet with Yazid ibn Muawiya. However, they rejected his request. He tried to save the lives of his relatives by telling them to leave but they insisted on staying with him.

What is the ruling on organ donation?

It is impermissible to take a dead person’s organs. Some scholars allow someone to donate an organ such as a kidney if they can do without it, especially if they are donating it to someone close to them such as their father or mother and doing so would save their life. It would not be permissible to donate your eye or your hand for example because you do not in fact own your own organs but rather they belong to Allah. It is permissible to donate blood because it replaces itself and donating it does not detract from a person’s makeup.

Should we vote in elections such as the upcoming US presidential election?

You have the choice to take part or not to take part. Both are acceptable. If you believe that voting for a particular candidate will most likely protect people in general and Muslims specifically from evil and be a source of good then you can do so. If you are unsure as to what is the best choice to make then there is no harm in not voting, except in a rare situation in which scholars and intellectuals, based on their assessment of current affairs, are in agreement that if Muslims do not vote then this will have a serious negative consequences. In this situation it would be an obligation to vote to prevent harm taking place.

Is it permissible to vote for a female candidate considering the statement of the Prophet ﷺ that: “A people who put a woman in charge of their affairs will never succeed”?

The same principle applies: if it most likely that by electing a woman president good will be attained and evil will be avoided then it is permissible to vote for her. If this is not the case, it is better to avoid doing so.

Is it permissible for a male teacher to teach a woman the Qur’an?

This is permissible if the male teacher teaches from behind a veil and as long as the two are not alone together. It has been narrated that: “A man must never be alone with a woman even if he is teaching her the Qur’an and even if she is Maryam bint `Imran.” The Companions would take knowledge from the wives of the Prophet, the Mothers of the Believers from behind a veil.

What is the difference between a ‘hizb’ and a ‘ratib’?

They are essentially the same thing. Linguistically a ‘ratib’ is a fixed thing which is recited consistently and a ‘hizb’ is a section or an amount of Qur’an or adhkar which is recited. 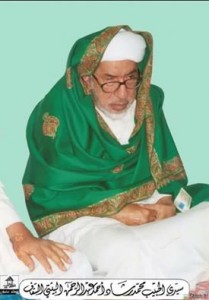 Habib Muhammad Rashad bin Ahmad al-Bayti was a descendant of Shaykh Abd al-Rahman al-Saqqaf. He was born in 1344 (1926) in the town of Kaninah near Yemen’s Indian Ocean coast. His father died when he was eleven so it was his mother and his paternal uncle who took care of his development. He had a love for knowledge from an early age despite the environment around him in which ignorance prevailed. In fact he rarely mixed with his peers, which led one of his relatives to say to his mother that there was something wrong with him. His mother had great insight, however, and replied that her son would go on to great things, that he would rise far above his peers and that he would one day judge between them, which indeed happened.

He was known for always praying the five prayers in the mosque and reciting the Qur’an between Maghrib and Isha, as is the practice in the mosques of Hadramawt. He began seeking knowledge in earnest and when his shaykh left the town he sought permission from his mother to go to study in Tarim. She said to him: “Who will look after me, an old blind woman? Stay with me and Allah will bring someone to teach you in your home town.” Sure enough, a short time later Shaykh Muhammad al-Amudi arrived in the town and Habib Muhammad spent years learning from him.

In 1389 (1970) he performed hajj and visited the Prophet ﷺ for the first time. He attended the gatherings of Habib Ahmad Mashhur al-Haddad in Jeddah and met with Sayyid Alawi al-Maliki, Shaykh Hassan Mashat and Sayyid Muhammad Amin Kutbi in Makkah.

The knowledge that he had gained led the scholars of the region to insist that he be appointed as a judge. He tried to refuse, but he eventually took up the position of qadi in the town of Hajr. Hajr was known for the roughness and tribal mentality of its people but he remained in that position for sixteen years. He was loved and respected by all due to his justice and good character. At one point someone who he had ruled against opened fire on his house but he patiently bore trials such as this and others. After the court in Hajr was closed, Habib Abdullah Mahfuz al-Haddad requested that he come to Mukalla. He was then made qadi in the city of al-Shihr.

The turmoil which followed the Communist take over of the region led him to settle in the Hijaz. His house in Jeddah was always open for students of knowledge and visitors.

Habib Muhammad was extremely humble and would refer to himself as nothing but a bedouin from Hajr. He loved nothing better than discussing fiqh and had a great concern for students of the sacred sciences. He authored a useful commentary on the grammar text ‘al-Ajurrumiyyah’ entitled ‘al-Taqrirat al-Bahiyyah’ published by Dar al-Minhaj.

He passed away in Jeddah on 2nd Muharram 1438 (3rd October 2016) at the age of 93 after a long life in service of Islam. He was bed-ridden for the last eight years of his life but he patiently accepted his state. The death of Habib Abd al-Qadir al-Saqqaf in 1431 / 2010 had a huge spiritual effect upon him.

Habib Ali al-Jifri recalls studying Habib Ahmad bin Zayn al-Habashi’s al-Risalah al-Jamiah with him at a young age, which is traditionally the first text that any student studies. Habib Muhammad would insist that he was not worthy of teaching. Habib Ali maintained his relationship with Habib Muhammad, who would always give him advice and direction. When Habib Muhammad lost the ability to speak he continued to give him advice in writing.

May Allah pour His mercy upon Habib Muhammad, allow us to benefit from him and fill the gap that his death has left in the Ummah. 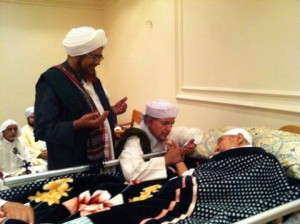 There are brothers and sisters who have attended the Dowra or have studied abroad for a short time. They then return to their communities to teach what they learn as they have been encouraged by their teachers to do so but they encounter people (some of whom are connected to this path) who do not support them and even discourage others from taking knowledge from them on the grounds they have not studied enough. What is the best way of dealing with this?

They should persevere in their dawah and not be affected by what these people say. They should show these people respect, maintain good relations with them and not treat them in the same way as they are treating them. They should emphasise the well known principle that anyone who has even one piece of Islamic knowledge is an `alim (literally someone who knows) and he must act upon it and teach it. They must teach what they know and learn that which they do not know. If the people who are opposing them are aware of Imam al-Haddad then they can tell them what Imam al-Haddad says in the introduction of al-Dawah al-Tammah.