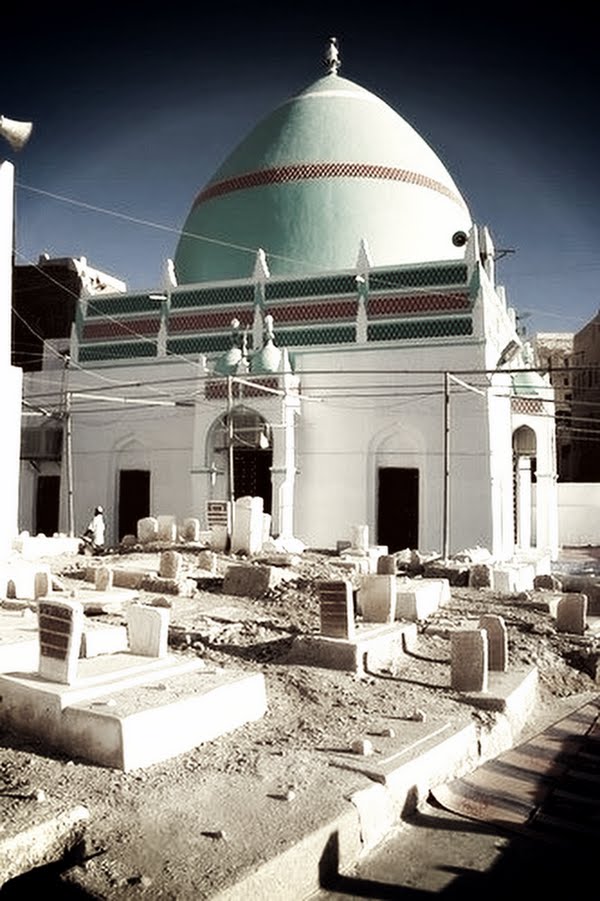 His mother was the knower of Allah and caller to Him, Sayyidah `Alawiyyah bint Husayn al-Jifri.

Habib `Ali was born in the town of Qasam, North East of Tarim, in 1259 (1843) at a time when his father, Habib Muhammad, was calling to Allah in the area at the order of his shaykh, Habib `Abdullah bin Husayn bin Tahir. It was Habib `Abdullah who named him `Ali. In 1266, Habib Muhammad moved to Makkah, where he became the Mufti of the Shafi`i school. Habib `Ali remained with his mother in Qasam where he excelled in the study of the Qur’an and the sciences of the Sacred Law until 1271, when they moved to Say’un. There he studied at the hands of Habib `Abd al-Rahman bin `Ali al-Saqqaf and Habib Muhsin bin `Alawi al-Saqqaf and others. He would also attend the gatherings of the great Imams, Habib Hasan bin Salih al-Bahr and Habib `Aydarus bin `Umar al-Habashi. In 1276, he travelled to Makkah and spent two years in the company of his father taking as much as he could from his knowledge and adab. He also took from Shaykh al-Islam, Sayyid Ahmad Zayni Dahlan and other great scholars of the time.

He returned to Say’un in 1278, where he started teaching while still seeking knowledge at the hands of the scholars of the region. It was at this time that he was united with the shaykh at whose hand his greatest opening came, the Qutb Habib Abu Bakr bin `Abdullah al-`Attas. Habib `Ali spent around two years in Habib Abu Bakr’s company and said: “If I was given the choice between the bliss of Paradise and sitting in the presence of Habib Abu Bakr, I would choose sitting in his presence.” Habib Abu Bakr informed Habib `Ali that he would be like a magnet that pulled people’s hearts to Allah.

Habib `Ali then broadened his call to Allah, and Allah placed love for him in people’s hearts. He said: “I do not see a net more effective in capturing immense gifts and divine knowledge than calling people to Allah.” Out of his sincerity, if he stood up to give a public speech, people would cry before he even opened his mouth. The mercy that he had for creation was such that he would not sleep before making tawbah on behalf of the whole Ummah and asking Allah to guide the scholars, teach the ignorant and pardon the wrong-doers. He said: “My hope in Allah is that He will not punish a single person who lives in my time, and this is not a great thing for Allah.” His great companion on the path, Habib Ahmad bin Hasan al-`Attas said of Habib `Ali: “Was he someone who prayed a lot or did not sleep at night or made an immense amount of dhikr? No. Rather, he loved his Lord and his Prophet Muhammad and his predecessors, so they brought him to them and ordered him to speak with their tongue and to call to Allah as the direct deputy of the Prophet.”

Along with his concern for the spiritual nourishment of the people, he also arranged financial support for numerous poor households. He had a great concern for students of knowledge and spent his wealth supporting them and his time educating them. In 1296, he built a Ribat or school in Say’un for students of knowledge, the first of its kind in Hadramawt. Students came from far and wide to study and live in the Ribat, which produced a large number of scholars and callers to Allah. A few years later, Habib `Ali built a mosque, Masjid al-Riyad, as an extension of the Ribat.

Habib `Ali is best known for his immense connection to the Messenger of Allah ﷺ. On one of his visits to him in al-Madinah, the Prophet ﷺ gave him the good tidings that his actions and the actions of his companions had found acceptance with Allah.

He established an annual gathering of mawlid in Say’un on the last Thursday of the month of Rabi` al-Awwal which up to 40,000 people attended, all of whom Habib `Ali provided with food and accommodation. The mawlid of Imam al-Dayba`i was recited in the gathering until in, 1327, Habib `Ali composed his masterpiece, Simt al-Durur, which he described as a “gift to those of later generations, for in it is an exposition on the state of the Prophet ﷺ.” The fame and popularity of Simt al-Durur rapidly spread and it continues to be one of the most popular and widely read of all the mawlid compositions. In 1328, Habib Salih bin `Alawi Jamal al-Layl wrote to Habib `Ali, his shaykh, informing him of the impact Simt al-Durur was having in East Africa. On the island of Lamu Habib Salih built his own Masjid al-Riyad, and gathered great numbers of people to read the mawlid on the last Thursday of Rabi` al-Awwal, a gathering which continues to grow to this day.

Habib `Ali’s poetry, which reached six volumes, likewise found acceptance throughout the Muslim world. His collected prayers upon the Prophet ﷺare also evidence of his love and connection to him. One of his well-known prayers is:

“O Allah, bestow prayers and peace upon our Master Muhammad, the key to the door of the mercy of Allah, to the extent of the knowledge of Allah, which continue eternally as the dominion of Allah continues eternally, and upon his Family and Companions.”

His speech was recorded by his students, among them his grandson, Habib `Umar Mawla Khaylah, whose compilation reached ten volumes.

He died in Say’un on 20th Rabi` al-Thani 1333 (1915). A great dome was erected over his grave to accommodate visitors and gatherings of knowledge and remembrance which continue to this day. His hawl, or annual commemoration of his passing, is a great event in the calendar of Hadramawt and thousands come to connect to and remember this great Imam. A similar hawl takes place in Solo in Java where a number of his progeny are buried. He left behind a number of children, the most celebrated being his son, Habib Muhammad, who succeeded him, and his daughter, Hababah Khadijah, one of the most pious women of her day.